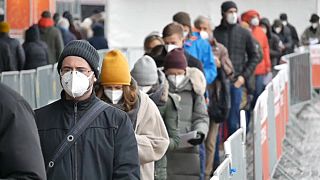 Austria begins mass coronavirus testing in lead up to Christmas

Austrian provinces have launched a voluntary mass coronavirus testing programme with the aim of detecting COVID-19 cases ahead of the holiday season.

Ten million tests have been ordered for a population of 8.8 million with hopes that a testing programme will help the country emerge from its second set of lockdown restrictions on Monday.

Stadthalle, a concert and event venue in Vienna, is one of three locations in the Austrian capital where the testing programme, inspired by a similar one in neighbouring Slovakia, occurs.

Two thousand army recruits have been mobilised to staff the centres in Vienna alone. The voluntary programme had low turnout early on due to technical issues with registering with people saying they had to wait hours to register.

Austrian health minister Rudolf Anschober said the "aim is to detect people who are infected without knowing it, who have no symptoms." It's also intended to prevent a rise in infections over the holidays.

Testing has been suspended in parts of the Austrian Alps after heavy snowfall in the region.

Several weeks before Austria, Slovakia carried out a mass testing programme mass tests but then postponed the third round of testing.

According to expert Niki Popper, it is unclear whether a lockdown or mass testing reduced the Slovakian infection numbers.

"Mass testing is not really the first thing scientists would propose. Why? Because it is not very focussed, of course. The issue with such a measure is: which parts of the population will participate?And that's a bit like fishing in the dark, so to speak."

Austrian officials plan to test the population at the beginning of January as well.