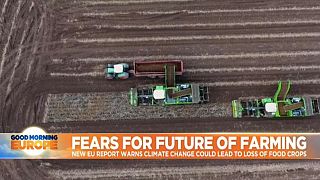 Crop and livestock production is projected to decrease and may even have to be abandoned in parts of Europe’s southern and Mediterranean regions due to the increased negative impacts of climate change, according to a European Environment Agency (EEA).

The study says that adapting to climate change must be made a top priority for the European Union’s agriculture sector if it is to improve resilience to extreme events like droughts, heatwaves and floods.

Speaking at the launch of the report, the executive director of the EEA, Hans Bruyninckx, said the findings made for alarming reading.

"New records are being set around the world due to climate change, and the adverse effects of this change are already affecting agricultural production in Europe, especially in the south," he said.

"Despite some progress, much more must be done to adapt by the sector itself, and especially at farm-level, and future EU policies need to be designed in a way to facilitate and accelerate transition in this sector."

A tale of two Europes

According to the agency, climate impacts have led to poorer harvests and higher production costs, affecting price, quantity and the quality of farmed products in parts of Europe.

While climate change is projected to improve conditions for growing crops in parts of northern Europe, the opposite is true for crop productivity in southern Europe.

According to projections using a high-end emission scenario, yields of non-irrigated crops like wheat, corn and sugar beet are projected to decrease in southern Europe by up to 50 % by 2050. This could result in a substantial drop in farm income by 2050, with large regional variations.

In a similar scenario, farmland values are projected to decrease in parts of southern Europe by more than 80 % by 2100, which could result in land abandonment. Trade patterns are also impacted, which in turn affects agricultural income.

While food security is not under threat in the EU, increased food demand worldwide could exert pressure on food prices in the coming decades, the report says.

Watch Jack's report in the media player above