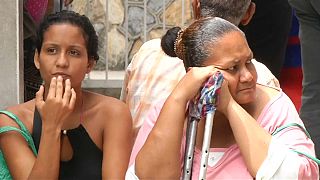 US National Security Adviser John Bolton said foreign governments could face retaliation if they continue to do business with the administration in Caracas.

"This is a very rarely used tool by the United States," said Bolton, speaking at a conference in Peru. "We've only used it sparingly in the past half-century.

"But the Maduro regime now joins that exclusive club of rogue states like Cuba, Iran, Syria, North Korea that are subject to that form of sanctions."

This is the latest move by the US to force out the embattled Venezuelan leader, with whom Washington severed ties back in January.

The US and dozens of other countries, including Germany, France, the UK as well as the EU have backed opposition leader Juan Guaido.

Guaido declared himself president back in January, accusing Maduro of corruption and of running the Venezuelan economy into the ground.

The Trump administration claims the timing of the sanctions reflects the US assessment of the talks which started in May — and are being mediated by Norway — are being used by the Maduro regime to buy time.

Venezuela recently accused the US of “hostile and illegal incursions” by sending military aeroplanes and ships into its territory.

Caracas urged the UN Security Council to investigate “dangerous” actions by the that threaten war while behaving like an “outlaw state”.