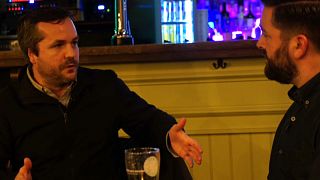 NBC's Alexander Smith has taken to the streets of the United Kingdom to gauge opinion on the nation's most talked about issue - Brexit.

"I thought they would've come up with some sort of solution, you know, for the best of Britain."

Across the UK, this kind of sentiment is echoed by Remainers and Leavers alike. How is it 50 days out from Brexit with no plan in site? This is what student Kane Santora expresses to NBC's Alexander Smith as they chat on the streets of Brixton.

Brixton, in Lambeth, is a Remain heartland- it had the highest percentage remain vote in the entire UK, with a margin of 78.6% Remain to 21.4% Leave. People there are mostly worried— about crashing out with a no deal, about the aftereffects of the deals on the table, even about the possibility of civil unrest in the style of the yellow vests in France. Simon Sandberg, a management consultant, laid out the bleak future he saw couched in the language of Brexit.

"We’re either faced with an economic catastrophe which would be leaving on a no-deal Brexit, or a kind of political catastrophe, which might mean overriding the wishes of the majority... We have deep divisions, and they’re going to last for some considerable time. They’re going to be exacerbated, almost irrespective of where we now go."

Cardiff, in Wales, also swung dramatically to Remain, though not quite by as large a margin as Lambeth. The Brexit vote in Cardiff went 60% Remain and 40% leave.

As a whole, though, Wales voted Leave. Dave Jenkinson is a construction worker from Cardiff— he spoke to Smith in a pub about why he thought Welsh people wanted out.

"When you're calling a vote like that, and to the general public, I think you're asking someone, do they want a change or don't they want a change? And I think the answer you got is the vast majority of the country wanted a change," he said over a pint.

"And politicians, I don’t think they’ve done themselves any favours. Both sides, Remain and Leave have basically all been exposed for lying. Time’s going to run out when they actually have to all get behind something in a majority vote, no matter what anyone does."

As contentious as it is, it's not something that brings up feelings of hate or anger at those on the other side of the vote, at least in the people we spoke with. But they are following every twist and turn closely, able to offer analysis at the drop of a hat— or the flash of a television camera in the road.

"If we do leave, I’d be sad if they closed the borders, because I... That’s a stupid idea," said Jenkinson.

"We’re way too integrated, you can’t reverse it now. If they made a law, it’d be unpoliceable."

Join Alexander again tomorrow for a trip to Boston in Lincolnshire, and the scenic Scottish capital, Edinburgh.