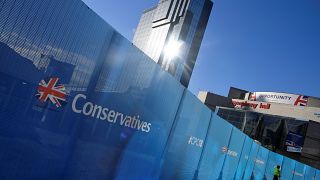 In the UK, the ruling Conservative Party is holding its annual conference in Birmingham, and so far the issue of Brexit is dominating the event.

Prime Minister Theresa May is drawing increasingly strong criticism from some members of her own party over her so-called Chequers plan, and pro-EU campaigners are holding 'Bin Brexit' protests outside the venue.

Euronews spoke to Eloise Todd, CEO of campaign group Best For Britain, which is calling for the UK government to hold a second referendum after a Brexit deal is agreed with negotiators in Brussels.

Ms Todd, who says she was refused access to the conference, said: "We think it would be absolutely democratic to put that question back to the people, now that the reality of Brexit is emerging for the country.

"Because for the last year and a half there has been a majority of people in this country in favour of staying in the European Union."

She hopes the protests will convince some Conservative MPs, as well as members of the opposition Labour Party, to be "open-minded", and give their support to what she calls "a people's vote" on the Brexit deal.

Theresa May has repeatedly ruled out the option of a second referendum, dismissing it as "a gross betrayal of our democracy".

But campaigners from Best For Britain insist some Conservatives are open to the idea, citing Heidi Allen, MP for South Cambridgeshire, and former Home Secretary Amber Rudd MP.

With just six months until Britain is set to leave the EU, on the 29th of March 2019, negotiations between Westminster and Brussels have reached an impasse.

The conference is set to last all week, and it is expected that Mrs May will attempt to deflect attention from the difficult issue of Brexit by unveiling new domestic policies.