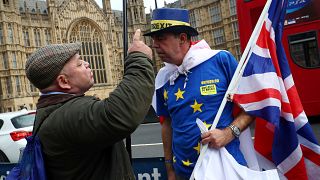 At least 80 British MP's from Theresa May's Conservative party will rebel against her Brexit deal if she continues with her so-called Chequers plan - according to Steve Baker, the former Brexit minister.

Speaking to the Press Association, Steve Baker MP said that Britain should instead be seeking a Free Trade Agreement previously proposed by European Council President Donald Tusk in March. Baker argued that if the Prime Minister was going to try to rely on opposition votes to get her plans through parliament then May’s Conservative party would “suffer the catastrophic split which thus far we have managed to avoid”.

Baker is among some Brexiteer politicians in the UK who argue that the plans do not go far enough. Former Foreign Secretary Boris Johnson resigned in July, saying: “It now seems that the opening bid of our negotiations involves accepting that we are not actually going to be able to make our own laws. Indeed, we seem to have gone backwards since the last Chequers meeting.”

With 200 days to go until Britain formally leaves the EU and 6 weeks until October's crunch Brexit summit – Prime Minister May will have to either find a way to appease her opponents or significantly change her plans.