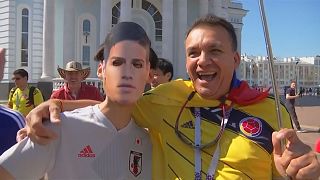 With their yellow shirts and appetite for a fiesta, Colombian soccer supporters brought a wave of tropical exuberance to the stolid citizens of Saransk ahead of their teams' World Cup opener against Japan on Tuesday.

In downtown Saransk, they swayed their hips as best they could to Latin music while locals in the crowd looked on with some bemusement.

The smallest of the World Cup hosts, Saransk is a remote city on the Russian steppes and the invasion by Colombians, Peruvians, Japanese and others has been something of a pleasant shock to the system.

There was solidarity rather than rivalry among the supporters of Colombia and Japan as they chanted and cheered together.