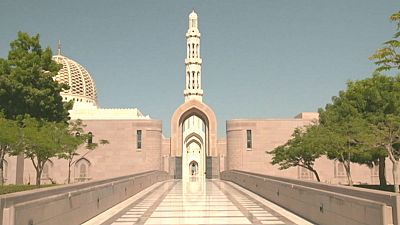 In this edition of Oman Life we continue our exploration of the country’s extraordinary cultural heritage by delving into Muscat, the melting pot that is the capital which is filled with stunning architectural sights with a modern twist.

Our starting point, the impressive view onto the famous UNESCO site: the Bahla fort and oasis. The fort bears witness to a rich history and is a masterpiece of clay architecture.

“The Bahla fort is one of the oldest forts in Oman. It was a capital of Oman during the Nabhani dynasty. They ruled Oman for around 500 years.”

During that time people used to live within fortified walls. Most of their houses were interconnected with the next one and richly decorated inside.

“The niches we call it Rosanna, people used to put their perfumes there or lights like candles or lanterns for lightening.” added Yazidi.

Leaving the oasis behind we journey on to the capital Muscat which is set between the sea and rugged mountains. With its oriental Arabesque-style architecture, the city is a unique fusion of tradition and modernity.

For painter Halima Albulushi, who is part of a new generation of contemporary artists, it’s an inspirational place.

“If I describe Muscat in colours I think I choose white because everything is white, the houses are white. There’s also some brown. You can see brown in the windows, doors and mountains and also I’ll choose blue because of the sea,” said Albulushi.

The colours of the city also seem to be reflected in the staggering marble of the Sultan Qaboos Grand Mosque – one of the city’s most outstanding landmarks. With space for 20,000 worshippers it is one of the largest in the world.

Amongst some of the most stunning treasures inside is the opulent crystal chandelier. It is 14 meters tall, weighs eight tons and has more than 1,100 light bulbs. It illuminates the main prayer hall, a place of spirituality and of great importance to the people here.

“This is something we feel proud of that this mosque is reflecting the Omani identity,” added Dhuhli.

Another example of this identity is the city’s famous souk with its labyrinth of alleyways. It’s one of the oldest markets in Oman and well known for its handicraft. It’s a bustling atmosphere with a fragrance of Frankincense in the air.

Shopkeeper Akhtar Al Balushi explained: “The Mutrah souk is a place where people get to know each other, where old and young people meet, drink coffee and talk.”

The vision for the city’s cultural future is reflected in the Royal Opera House Muscat – a world class venue where legends such as Jonas Kaufmann, Plácido Domingo and Renée Flemming have performed.

Open since 2011, this marvel of contemporary Islamic architecture showcases a versatile programme – from opera, ballet and jazz to Arabic music.

Umberto Fanni is the Opera’s general director: “This Royal Opera House contributes to create a bridge between different cultures and to give the opportunity to the young generation to look back at their traditions but also to look forward in the future.”

Traveller's diary: the magic of the cultural heritage