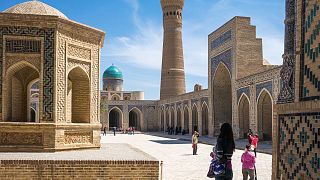 Uzbekistan, a mysterious landlocked country in Central Asia, was once at the heart of the route connecting the East and the West.   -   Copyright  Canva
By Giulia Carbonaro  •  Updated: 14/11/2022

Until a few years ago, Uzbekistan remained a fabled land closed off to curious foreigners and hopeful explorers.

But now this country, once considered the centre of the world due to its place at the heart of the Silk Road, is changing its image, welcoming visitors and inviting them to discover the beauty of Uzbekistan.

Once at the crossroads of the Western and Eastern civilisations, the landlocked country was the route through which the likes of Alexander the Great, Genghis Khan and Marco Polo travelled. Its ancient cities offer a jaw-dropping architectural experience, with its breathtaking mosques, madrassas, towers and mausoleums influenced by a unique blend of Turkish, Soviet and Uzbek styles.

"Our people, our food, our architecture is the result of this complex and diverse history," says Dilfuza Samandarova, Director of the National PR Centre at Uzbekistan’s Ministry of Tourism and Cultural Heritage.

"That's why we have everything tourists might be looking for - from halal food to ancient Buddhist sites."

What are the best cities to visit in Uzbekistan?

The country used to be at the very heart of the Silk Road, the ancient trade route linking China to the West. The route saw traders carrying goods and ideas between Xi'an and the Mediterranean, travelling across the Great Wall, the Taklamakan Desert and the Pamir Mountains. This is the road Marco Polo took to reach China.

At the centre of this trade were the magnificent Uzbek cities of Samarkand, Bukhara, Khiva and Tashkent, now the country's capital. In these cities, the memory of the ancient Silk Road is perfectly preserved, conjuring the atmosphere that merchants and traders could have experienced thousands of years ago. There's so much to see in this city, named a UNESCO World Heritage Site in 2001, but you should not miss the Registan and Bibi Khanum mosques and the Gur-e-Amir mausoleum, the magnificent resting place of Turco-Mongol conqueror Timur.

Samarkand, in particular, is a must-see for anyone fascinated with the ancient history of the Silk Road. The city, one of the largest and most ancient in Central Asia, has amazed visitors for centuries, including Alexander the Great, who allegedly said upon seeing it that it was "more beautiful than I ever imagined."

Bukhara, less than a two-hour train ride from Samarkand, was one of the most important sites of the Golden Age of Islam, and it retains its glorious mosques, domed marketplace and madrassas (historic Islamic schools). Here you can visit the tomb of legendary ruler Ismail Somoni, who renounced Zoroastrianism for Islam, and walk in the steps of Marco Polo. The city's bazaar is one of the most impressive you'll find in the whole country.

Khiva and its ancient inner city Itchan Kala, at the western border with Turkmenistan, is considered an open-air Silk Road museum, with its ancient streets, mosques, palace and mausoleum telling the marvellous story of this historic city.

Once a major trading post on the Silk Road, the capital Tashkent is the best place in Uzbekistan to see the influence of the Soviet Union on the country. This is also the place where the modern and ancient worlds collide in Uzbekistan, with the city holding an international film festival, a contemporary art gallery and various art, music and architecture events throughout the year.

Where can I explore nature in Uzbekistan?

Uzbekistan is known for its breathtaking landscapes, including the red dunes of its desert and the rugged peaks of its mountains, but there’s one natural sight which offers a unique warning to humankind.

The Aral Sea, a lake which touches all five Central Asian republics - Kazakhstan, Kyrgyzstan, Tajikistan, Turkmenistan and Uzbekistan -, is completely dry on the Uzbek side, due to the unsustainable cotton cultivation the Soviet Union imposed on the area.

In the face of such devastation, the dead landscape of the former lake basin, inhabited by the relics of lost ships and boats, offers a sobering lesson about the impact of human activity on the planet.

When is the best time to visit Uzbekistan?

"Maybe six or five years ago we would have suggested a specific season to visit the country, but now there is no reason because we have something for every season," says Samandarova.

The country has recently reinvented itself as a winter holiday destination, with new ski centres tucked among its snowy mountains.

Samandarova recommends visiting Uzbekistan in autumn, the best time to walk through the historic sites and take in the scenery, lulled by the good, but fresh, weather. The best season to try Uzbek food is in the spring and in summer, when the crops have been gathered and the country's restaurants are full of the best fresh vegetables and fruits.

What should I eat in Uzbekistan?

"We have a lot of food here," says Samandarova, laughing. "There's Plov, Lagman, Manti, Shurpa, Shashlik. All of them are prepared with seasonal products, grown naturally."

Plov is probably the most famous traditional food here, considered the national dish of the country. It's a hearty rice pilaf cooked with lamb or beef, onions, apricots, garlic, raisins and carrots, usually served on a huge plate and accompanied by tea. Just seeing plov being prepared is an experience, as the rice is cooked in giant iron cauldrons called "kazans" over an open fire.

Shashlik is another dish designed to make meat eaters happy, as it's essentially shish kebab - skewered meat cooked on a grill. For vegetarians, there are options such as skewered potatoes, tomatoes and mushrooms, which are just as delicious.

Another dish to sample is Manti, which are large steamed dumplings filled with ground lamb or beef and served with a yoghurt dip, and usually eaten using your hands.

There are many more dishes to try in Uzbekistan though - including toasted apricot seeds, Samsa and Chuchvara - so if you're planning a trip here, just follow your nose and dig in.

How should I greet the locals in Uzbekistan?

You don't have to go out of your way to blend in with the local life and meet Uzbek people: the locals will come to you.

"Our people really like tourists," Samandarova says. "I've travelled a lot, and I’ve never seen the same in other countries. They will say hello, how are you, and they will start talking with you, having a conversation."

The languages spoken in Uzbekistan are predominantly Uzbek and Russian, while a minority speak Tajik, though after the fall of the Soviet Union and the country’s independence in 1991 more and more people are now speaking English too.

If you talk to the local people, you might get more than just a chat, Samarandova says - you might even end up trying homemade food and becoming an honoured guest in an Uzbek home.

"For example, if you get lost in our country and you ask someone for help - if you are without money, without a car, without a map, or you don't know where you are - Uzbek people will help you.