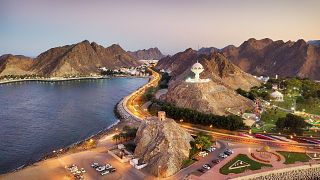 Oman’s rich cultural tapestry is deeply entwined with the diversity of its terrain, providing a sense of identity that infuses its cities, towns and mountain villages.

From its effortlessly charming capital city Muscat, to the abandoned villages that lie in the rugged peaks of the Al-Hajar mountains, Oman is filled with stories – and it’s writing a new chapter as we speak.

“**Oman** is a secret Arabian gem. It’s a place where you can discover new things every day – whether that be our culture, our nature, or our history,” Sada Abdullah Al Harthi, Director of Business Development at the Ministry of Heritage and Tourism reveals.

“In the coming years, we’re confident that more tourists than ever before will join us in this discovery and realise that Oman is a destination that has it all.”

How does the future look for Oman?

The Omani Vision 2040 is an ambitious one, as the government aims to attract 11 million annual visitors. However, with its abundance of vibrant cities, sandy beaches, vast canyons and mountain summits, that number could easily be surpassed.

At the Arabian Travel Market 2022, hosted in neighbouring Dubai, Oman’s Ministry of Heritage and Tourism announced the opening of the Four Seasons Resort and Private Residences Muscat. A former yacht club and marina conversion, the complex will add a new layer of opulence to the country’s hospitality scene.

The sprawling resort in Al Bustan will join the first Jumeirah hotel in Muscat, tucked in the secluded Bandar Jissah cove between the Al-Hajar mountains and the Arabian Sea. The hotel is due to open this year, followed in the near future by global hotel giants St. Regis and Nikki Beach Hotels & Resorts.

“This is just the beginning of a major acceleration in hospitality offerings in Oman and there’s more to be announced soon,” says Al Harthi.

“We’re targeting premium markets and families to experience the luxury of our hotels, as well as enjoying everything the natural landscape has to offer.”

What natural wonders can you explore in Oman?

Although the future is bright for Oman, it would be a mistake to wait for the upcoming mega-projects to get off the ground before visiting, especially if you love the great outdoors.

From wild dolphin watching, to an invigorating climb under the unflinching gaze of wild mountain goats, there are endless ways to meet the local wildlife in Oman.

For Al Harthi, few places in the world compare to Masirah Island, located 500 kilometres south of Muscat and circled by wild dolphins.

The pinnacle of ecotourism can be found on the beaches of Ras Al Jinz, where thousands of turtles migrate to nest every year.

The pinnacle of ecotourism, meanwhile, can be found on the beaches of Ras Al Jinz, where thousands of turtles migrate to nest every year. The reserve is believed to be the biggest turtle hatching spot in the Indian Ocean with up to 60,000 eggs laid per season by the endangered green turtle. Night time tours are run by conservationists between April and August.

During those summer months, visitors should also venture to Jebel Shams or Jebel Akhdar - meaning Green Mountain - to experience two of the most breathtaking summits in the region.

Jebel Shams is dubbed “the Grand Canyon of the Middle East” thanks to its simply mesmerising Balcony Walk around the edge of the soaring Wadi Ghul canyon.

Standing at 3,028 metres, Jebel Shams is dubbed “the Grand Canyon of the Middle East” thanks to its simply mesmerising Balcony Walk around the edge of the soaring Wadi Ghul canyon.

Where can I experience Oman’s rich culture?

The capital city Muscat is awash with cultural hotspots including the Sultan Qaboos Grand Mosque, Royal Opera House Muscat and the buzzing souqs of Mutrah. There's a mixture of modern art, historical museums and ancient buildings on offer here, forming a warren of bustling backstreets in the Old Town.

Across the nation, other historical destinations include UNESCO World Heritage Site Bahla Fort - a fascinating mud brick fortress in the Omani desert, dating from between the 12th and 15th centuries.

Elsewhere, noteworthy spots include the royally protected Land of Frankincense in the Dhofar region, harking back to the nation’s former lucrative trade routes. The ancient city of Qalhat also features the domeless Bibi Maryam mausoleum, one of the very few remnants of what was once a bustling trade hub.

For an immersive insight into Oman’s culture, Al Harthi insists that visitors take an enlightening trip to one of the emerging heritage inns.

The initiative sees ancient homes transformed into guest houses where visitors can eat, sleep and learn as part of a plan to preserve architectural treasures and highlight Oman’s culture, with six restored houses in Al Aqur village in Nizwa leading the way.

The heritage inns allow people to experience the way our ancestors lived and some of them are over 300 years old.

“The heritage inns allow people to experience the way our ancestors lived and some of them are over 300 years old,” says Al Harthi.

“Although we’re looking to the future of Oman, it is never with the intention of forgetting our past. We are proud of our heritage and preserving it is just as important as our newer ambitions.”