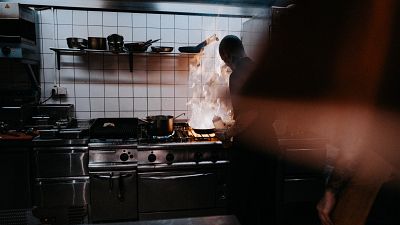 The rise of ‘at home’ food boxes has been phenomenal since lockdown began. A wide range of venues – from greasy spoons to Michelin-starred fine dining restaurants – have been adapting their menus for us to enjoy at home.

Lisa Goodwin-Allen, head chef at the Michelin-starred Northcote in Lancashire UK’s Ribble Valley, has seen her boxes fly out in super-quick time.

Last week the restaurant sold almost 700 in under half an hour, and many on social media have likened the rush to grab one as being akin to trying to secure Glastonbury tickets.

“You get some people who are really frustrated on the phone that they’ve missed out and you’re saying to them that it’s almost like trying to get tickets for a concert,” says Goodwin-Allen.

“The capacity and volume is massive but it’s essentially 700 portions of food. I’ve learnt so much from doing these boxes and it’s been amazing. It’s not just creating a plate of food, it’s the packaging, what keeps it safe, what’s the shelf-life and also what it looks like when it arrives with the customer.”

“It’s amazing when you see it all come together and people post pictures on social media. You’re putting a smile on people’s faces during a dark time and giving them a plate of food that provides an experience."

“I didn’t want to downgrade it – it was about doing things with sauces and presentation that people wouldn’t necessarily be able to do at home.”

Eagle-eyed readers based in the UK may have seen Goodwin-Allen on the festive edition of the Great British Menu. In the episode, some of the country’s top chefs went head-to-head to get dishes into a special banquet - held remotely as is the way during the pandemic - to honour NHS and key worker heroes.

Goodwin-Allen got not one, but three dishes into the final banquet - and even got to serve her creations to frontline staff, mid-shift, at a hospital. And it’s an experience Lisa says she’ll never forget.

“There was a lot of blood, sweat and tears but it was an incredible experience. I put a lot of time and effort into it and when we were doing it, it was crazy.

“It was brilliant to be doing it for such a special occasion and saying thank you to these heroes who have been there in our hour of need.

“Hearing the stories of some of the people who’d put their lives on hold and basically moved away from their families for weeks to go into hospital to care for people really gave you a sense of empowerment.”

At some point, the hospitality industry will re-open and people will be able to leave their homes and once again enjoy the delights of dining out. But Goodwin-Allen believes that the hunger for the ‘at home’ experience will remain.

She said: “I think it’s there in the pipeline to carry on, but obviously the numbers will be downgraded because we can’t manage that kind of capacity with the restaurant open.

“The kitchen is to service the restaurant. We’re incredibly lucky that the size of the kitchen at Northcote has allowed us to be able to do 350-plus boxes. You could move it away from the site with a different team, but I think you lose the touch and the feel of it because at the minute it all comes through Northcote.”

The Angel at Hetton, Skipton, UK

Just over the Pennines in North Yorkshire, Michael Wignall, chef proprietor of The Angel at Hetton near Skipton, has just opened bookings for nationwide delivery.

The Angel, a pub with rooms, initially offered ‘at home’ boxes for collection.

The five-course tasting menu is priced at £65 per person – plus delivery – and includes grilled lemon sole to start, a celeriac velouté with truffle, apple and preserved lovage, slow cooked salt aged pork for main, a cheese course and a delicious-sounding caramelised pineapple dessert. A vegetarian box is also available.

Wignall said: “I want to do stuff that perhaps - not replicates what I do in the restaurant - but comes close to that.

“I think of a menu that’s doable at home and how much can we pre-prepare. It’s about getting something of a high quality that you can’t necessarily buy in a shop but that’s got your signature. You don’t want to bombard people with technical elements because you want to make it as stress-free as possible.

“But you do want people to really enjoy the experience – it’s not just reheating things in bags and putting it on the plate.”

For many, the presentation of the food is as much a part of the restaurant experience as the food itself. One of the features of Wignall’s boxes is that they come with the plating up of the dishes sketched out by the chef.

He said: “I’ll start a dish – especially a new dish – by sketching it out and getting my thoughts down on paper. You don’t have to be a great artists – you just take it in more if it’s visual.

“I think to have that in the recipe box, people will learn quicker seeing that. It might make sense to us but to a home cook it might not.”

Wignall, who bought the pub in 2018 after building his reputation - and collection of Michelin stars - at some of the country’s top eateries, says lockdown has given him an opportunity like never before.

“We’re never going to have this time again. It’s been a real eye-opener – you’ve got to take that time to relax and also to relearn in a sense."

Michael Wignall
Chief Proprietor of The Angel at Hetton

“I’ve got books on the shelf – cookbooks – that I hadn’t had a chance to read before and there’s plenty of things to look at and learn.

“We’re doing things differently now. I know we’ll come out the other end a better business and hopefully the customers will appreciate that and the staff will come out of it with better welfare conditions.

“I don’t think we’ll ever go back to having tables at 9.30pm, 10pm at night so the staff aren’t finishing until 2am. In the UK, it’s not the same as on the continent where people want to dine at 9pm.”

Unlike Lisa though he doesn’t think The Angel at Hetton will continue with the boxes once the hospitality industry is, eventually, allowed to re-open so you better act fast!

He said: “When we first did them there was only 10 or 11 places doing it and the demand was there. A lot of places are doing it now and it’s great whilst those places are closed but even after the first lockdown when places were re-opening we saw a massive decline in it.

“We were only doing collection so it might have been different had we been doing it nationally, but you have to question yourself because you’d end up having so many people doing takeaway and that could jeopardise what you’re doing in the restaurant.

“After the first lockdown, we were packed out for lunch and dinner for months and that’s brilliant. It is a survival thing at the minute and it’s about staying relevant.”

For more information about the Angel at Home boxes click here.

He’s hailed by many as the world’s top chef and now three-Michelin starred Massimo Bottura, is offering a lucky few the chance to experience dishes from his Franceschetta 58 restaurant at home.

The offering includes some of the most popular dishes from the restaurant – the little sister of the incredibly popular Osteria Francescana – including the Emilia Burger, stuffed rabbit and calamarata with smoked clams and parsley.

All come with full instructions and only take around 15 minutes to prepare. And the price? A mere €16 for a main.

Delivery is available in Modena and Milan via MyMenu.

Not only is Pavillon Ledoyen one of Paris’ top restaurants it’s probably in the most spectacular location in the city, located in the eastern gardens on the Champs-Élysées.

And while a visit may be impossible at the moment, Parisians – and those living in the suburbs of the French capital – can still enjoy an array of treat from the three-Michelin starred kitchen of chef Yannick Alléno.

It doesn’t come cheap – the weekend brunch is €75 plus delivery – but a little bit of luxury is what’s needed right now. Orders can also be collected.