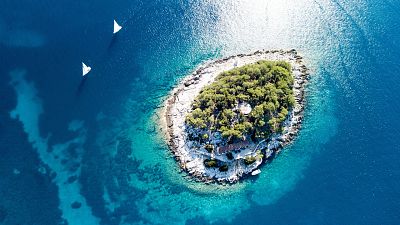 If you’re looking for somewhere to unwind after the past two years, we don’t blame you.

To help make your next relaxing getaway easier, travel experts at OVO Network have compiled a list of Europe’s most tranquil holiday destinations. So whether you’re looking for a little town by the sea, rolling countryside or mountain views, there’s something for everyone.

Combining data from Google Maps with local air pollution stats and population density, OVO has pulled together the top 10 tranquil places in Europe.

It has even pooled all this information into some handy infographics, so you can check each destination according to the factors which matter most to you, whether that’s the number of local spas or how many people live there.

To get you in the mood for some inner peace, here are the top three tranquil spots in Europe.

This small but perfectly formed Croatian island made it into the top three because of its charming seafront location and small population. It also boasts the best hotel access in Europe, according to the study.

If you’re planning a trip to this Adriatic idyll, stay in Hvar town so you can experience all the island has to offer, including glamorous nightclubs and wineries where you can sample local Dalmatian wines. Further afield (literally) if you’re staying on Hvar in late spring and early summer, make sure to visit the island’s famous lavender fields when they’re in full bloom.

The sunniest island in Croatia, this Mediterranean hotspot is also a great place to hire a boat and explore some of the more secluded and inaccessible beaches along Hvar’s coast.

If you love cheese, then the Swiss mountain town of Gruyeres is the ideal place for you. Nudging its way into number two due to its collection of peaceful spas, this medieval town also boasts some of the cleanest air in Europe, thanks to the snow-capped mountains that surround it.

As expected, there’s plenty of cheese on offer in Gruyeres. So whether you like your cheese in the form of fondu, melted over macaroni or served in a soup (soup de chalet, made from Swiss cheese and potatoes is a local speciality), there are lots of cheesy options available.

Dating back to the Middle Ages, the town is fully pedestrianised and boasts a 13th century castle. Or if you’re in the mood for something slightly different, there’s also a museum decorated by H R Giger, the artist most famous for his work on the Aliens trilogy of films.

Strolling into the number one spot, with breathtaking views and a tiny population, is this town in the south of Spain. Sitting in a rugged mountainous region, Zahara de la Sierra overlooks a valley and a lake. It’s also close to a wide variety of luxury spas and is less well known online, meaning you can escape the usual crowds of tourists.

Located in the province of Cadiz in Andalucia, the town is a pretty mix of churches, souvenir shops and bars, many of which overlook the scenery below.

There’s a 14th century castle to explore, as well as a man-made beach. If you like watersports, you can hire a kayak, or simply sit on the shores and watch the world go by while enjoying some Tortillitas de camarones (prawn fritters), one of the traditional dishes of Cadiz.

You can check out the rest of the top 10, according to your preferences, on OVO's chart.