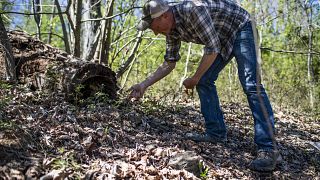 Foraging for mushrooms in the woods is a popular fall activity across Europe.   -   Copyright  Austin Anthony/AP
By Lily Radziemski  •  Updated: 12/10/2022

It’s autumn in Europe and for foraging enthusiasts that means only one thing: mushrooms.

From France to the Netherlands, thousands of tonnes of mushrooms grow in Europe at this time of year. For fans of foraging, picking them themselves is the only way to get their hands of these little pieces of fungal magic.

With the cost of living so high, many people are looking for free or cheap sources of food. So foraging is likely to be more popular than ever this year.

But before you set off, there are a few practical things to keep in mind, from country regulations to safety issues.

Where are the best countries to pick mushrooms in Europe?

Though France might be most famous for its grapes, it has more than 3,000 varieties of mushrooms, mostly located in the south around the Pyrenees and Provence.

In the hills between Cadenet and Lourmarin, Les Pastras runs a two-day foraging excursion. You'll get to hunt for ten different varieties of mushrooms, including cepes, chanterelle and black trumpet.

Germany is another great destination for mushroom foraging, with Brandenburg being a particular hotspot. Porcini, chanterelle and morels are some of the most popular types growing in the area. There are tours available with local guides where you can learn how to find and collect wild mushrooms.

For travellers in the UK looking to forage mushrooms, crossing the Channel isn’t a must. Fire + Wild in East Sussex that leads groups into the Ashdown Forest to identify both edible and medicinal mushrooms. Later, travellers can enjoy a tasting menu using the wild ingredients.

While truffles aren’t technically mushrooms, they are just as popular with foragers. In Piedmont, Tuscany and other regions of Italy there are numerous truffle-hunting tours operating in the autumn, with an added twist– a dog will lead the way, and search for truffles by scent.

Is it safe to go mushroom foraging alone?

Experts have one clear and definitive answer on this: no.

In the past month alone, France has recorded more than 60 cases of illness after members of the public picked wild mushrooms.

According to Food Safety News, smartphone apps being used to identify mushrooms are to blame in some cases, as they lead people to confuse toxic mushrooms with edible ones.

If you are in any doubt about whether a mushroom is safe to eat, pharmacists in France are trained to differentiate safe from toxic.

Pharmacists in France are trained to identify if a mushroom is safe for consumption or not.

Deutschland.de, a service in cooperation with the Federal Foreign Office in Berlin, warns, “Gathering mushrooms in the forest poses many dangers and only people with a trained eye should eat any mushroom picked in the wild.

“There are 60 deadly varieties in Central Europe. Many toxic mushrooms look like edible mushrooms and people die every year from eating poisonous varieties like the Death Cap.”

To avoid any risk, the safest bet is to go foraging with an expert.

Before embarking on a mushroom adventure, it’s also important to bear in mind that different countries have different rules.

This map shows which countries in Europe have guidelines or legislation specific to mushroom foraging.

In France, it’s forbidden to pick mushrooms on private property - if caught, you could be fined up to €45,000, jailed or forced to return the mushrooms to the property’s owner. There’s also a five litre per person per day cap on the quantity that you’re allowed to pick, wherever you go. Before setting off, check with the local 'Mairie' (town hall) for the rules.

In Germany, you’re allowed to pick mushrooms for personal use but not to sell, and there’s also a limit on how much you can take.

In Italy, it’s illegal to go truffle hunting without a dog, because of the damage that hand picking can do to the ecosystem. Outside of Piedmont, it’s forbidden to look for truffles at night.

When is the best time of the year to go foraging for mushrooms?

The best time to go often depends on the mushroom type and location, but the most popular time is generally autumn. This is when rain and humidity levels are ideal for growth.

In Italy, the mushroom season stretches from April to November, and even December in some southern regions.

In the UK, October is the height of mushroom season.

Could foraging be a source of sustainable superfoods?

Picking your moments: the science behind foraging in forests