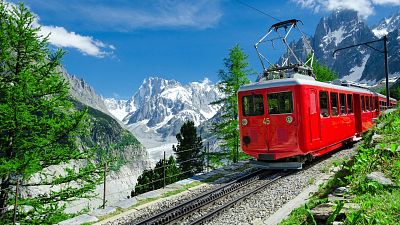 Europeans usually make a beeline for the beach in summer, but chaotic airports and scorching heatwaves have left us yearning for cooler days.

With climate change at the root of these record-high temperatures, flying isn’t the smart choice. Here are seven destinations in Europe you can reach by train - all with temperatures in and below the low 20s.

Amsterdam, Netherlands, for a chilled out escape

Ever easygoing, the Netherlands’ capital has managed to maintain its mild summers even as neighbouring countries sizzle. This means you can wander along the canals beside rows of colourful gabled buildings without breaking a sweat.

When it clouds over, you have the perfect excuse to get lost in the Van Gogh Museum or the resplendent 17th-century Royal Palace.

Direct trains run to Amsterdam from Brussels in two hours, Paris in 3.5 and London in four. From Berlin, the journey takes 6.5 hours, and Milan 11.5.

Berchtesgaden, Germany, for a cooling dip

Home to Funtensee, a scenic karst lake in an area known for record low temperatures, there’s no place better to cool off than Bavaria’s alpine town of Berchtesgaden.

Leave night sweats behind as you wrap up against the 8°C chill and wake up with a brisque dip in the sinkhole surrounded by rolling green mountains. With daytime temperatures in the mid-to-late teens, you’ll need to pack a jumper.

Berchtesgaden can be reached in 12 hours by train from London, 10.5 from Milan, 10 from Brussels and nine from Paris.

Chamonix-Mont-Blanc, France, for a sub-zero summit

Chamonix’s ground level temperatures in the teens and low 20s have nothing on the sub-zero chill at Mont Blanc’s summit. The highest mountain in the Alps can be climbed in around three days, though the less intrepid can hop on the aerial lift - which takes you from Chamonix town up to the Aiguille du Midi, a 3842m peak in the Mont Blanc massif - to enjoy cooler climes.

Chamonix town is 9.5 hours from London by train, 6.5 hours direct from Paris and five hours from Milan.

Copenhagen, Denmark, for the hygge lifestyle

Let the gentle sun wash over you as you glide down Copenhagen’s canals, then quench your thirst at a vibrant beer bar. If a summer shower hits, head inside the Designmuseum Danmark for some interior inspiration or wander in the footsteps of 17th century kings at Rosenborg Castle.

Missing the heat momentarily? Enjoy a dip in a floating hot tub. With temperatures in the low 20s, Denmark’s capital offers the perfect escape from blistering days.

Copenhagen is 15 hours by train from London and 14.5 from Paris via Brussels, Cologne and Hamburg, 7.5 hours from Berlin and 4.5 from Hamburg.

Edinburgh, UK, for ‘their hot is your cold’

Fairytale spires and a maze of cobbled streets are just part of the charm of Scotland’s capital. Don’t be alarmed by the locals donning their short-shorts and vest tops - with average winter temperatures dipping as low as 1°C, the current 15-18°C is positively baking. Climb the imposing Arthur’s Seat peak for sweeping, windswept views over the city.

Edinburgh is 4.5 hours from London by train, seven from Brussels and Paris, and 16 from Milan and Berlin.

With temperatures hovering around the low 20s, and refreshing British showers an almost daily affair, Liverpool is primed for a breezy getaway. It’s also famed for its culture. Spend a day snapping shots on Penny Lane and wandering the immersive Beatles Story museum, take to the water on the Mersey Ferry and marvel at the gothic Liverpool Cathedral from beneath your umbrella.

Liverpool is just over two hours from London by train, five from Paris and 13 from Barcelona.

Oslo, Norway, for the fjord breeze

Anticipate temperatures in the mid-teens to early 20s in Norway’s capital. Make the most of your respite from the heat as you swim and picnic among forests, beaches and monastery ruins along the Oslo Fjord. If the breeze becomes biting, seek shelter in an urban sauna, the Oslo Opera House or the Viking Ship Museum.

Oslo is 14 hours from Hamburg by train, 21 from Brussels and 23.5 from Paris via Brussels, Cologne, Hamburg, Copenhagen and Gothenburg.