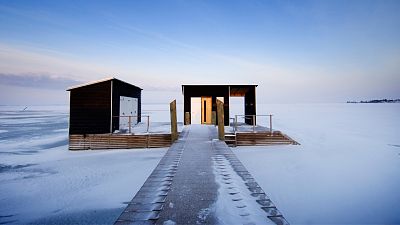 When you think of saunas, you probably think of Sweden, right?

Sauna culture is well known as a Scandinavian thing, but while the majority think they come from Sweden, saunas are originally a Finnish custom.

In fact, one of the easiest ways to annoy a Finn is to suggest that the sauna is Swedish.

Last December, the Finnish sauna was added to UNESCO’s Cultural Heritage list, a sign of how integral the sauna is to almost every Finn’s household. Research also shows that going to the sauna several times a week makes you less likely to experience a heart attack and can reduce the risk of dementia.

Originating from rural areas, the sauna has evolved over the years and nowadays it is easy to find a variety of saunas. From luxury models to the simple wooden structures, a whole range exists.

But what is it that draws these nordics to sit and sweat in a small room for so long?

A space to socialise

Axel Nurmio is a sauna enthusiast from Finland. He tells me he can’t even remember the first time he sat in a sauna, but guesses it was around the age of four.

“It’s a place for relaxation and just enjoying the moment more or less, I would say,” he says, in an attempt to explain why Finns love to sauna so much.

Saunas are everywhere in Finland, in fact there are 2.3 million in the country of just five million people. That’s almost one sauna for every two people. And if you don’t have a small sauna in your tiny flat, there is bound to be a communal one for the entire building.

Axel even tells me about saunas in student accommodation halls - a great way to meet new people and make friends.

These spaces are for socialising, and it’s completely normal to have a sauna session with some friends, especially in the summer when the sun doesn’t set and you can enjoy a midnight swim at the same time.

But Finns are picky with their saunas, expecting only the best.

“If you go in a sauna in a gym, it’s not as nice of an experience as if you go somewhere by the Baltic sea or by a lake,” Axel says. For him, the perfect sauna experience would be in a traditional log building heated with wood. He would bring in a nice cold drink (either a beer or the Finns’ favourite domestic drink Lonkero), followed by a swim in the sea or a roll around in the snow in winter.

Sauna temperatures are also a ‘hot’ topic, with Finns often poking fun at their neighbours in Sweden, claiming that they “cannot handle the heat”.

Axel says he finds 70-80 degrees Celsius to be the optimal heat as it doesn’t burn too much but is still warm enough!

Traditionally, foreigners have been warned of the requirement of having to go in nude, even in mixed-gender saunas.

However, times are changing and Axel says it’s more common to be wearing something in a mixed-sauna, which is perhaps a relief for anyone reading this.

There are several guides available online claiming to teach the correct sauna etiquette. Axel disagrees and says there really isn’t a right or a wrong way.

“You can have an eternal debate about what’s the best sauna in Finland and what kind of sauna is the best.”

So if you’re worried about doing something wrong, just relax and enjoy it. And if you feel awkward amongst the famously silent Finns, you know what to talk about. As Axel states, “I think it’s a good conversation starter in Finland because everyone has a relation to the sauna.”

Having spent the past year living in Sweden, he is excited to return home soon to be reunited with his beloved wooden hut. Because in Finland, they know how to sauna right.