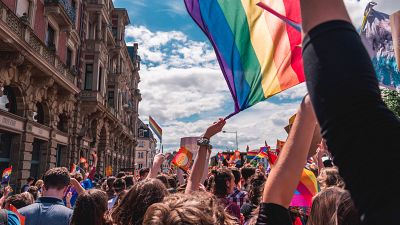 Europe is set to explode with LGBTQ+ energy this June as Gay Pride events kick off in cities across the continent.

Many of the vibrant celebrations are returning after being cancelled for two years running amid the coronavirus pandemic. Here are five of the most spectacular Pride parties to put in your diary.

Kicking off the month is Baltic Pride in Lithuania's capital. The annual LGBTQ+ event switches between Estonia, Latvia and Lithuania each year, with Vilnius hosting the celebrations in 2022.

It is the biggest LGBTQ+ human rights event in the Baltic states with participants travelling from all over Eastern Europe.

The event gets underway on May 31st with a flamboyant Rainbow Bus trip. The colourful music bus will carry representatives of the region’s LGBT community around Vilnius to encourage the participation of residents and visitors in the week’s events.

The main event will take place on June 4th with the March For Equality and Peace down Gediminas Avenue.

It will be followed by a sensational concert open to all Vilnius residents and visitors featuring singer Donny Montell, who represented Lithuania at the Eurovision Song Contest in 2012, and international drag performers.

After a two year hiatus, Roma Pride returns this June to the Italian capital. The event was first held in 1994 and now attracts thousands of revellers.

The festivities culminate in the Roma Pride Parade on June 11th. The event will see a stunning cavalcade of extravagantly decorated floats carrying DJs and dancers. The parade travels from Piazza della Republicca to Piazza Venezia and the Roman Forum.

On the way, it will pass some of the Eternal City’s most famous landmarks including the Colosseum. Thousands of visitors normally line the streets to watch the vibrant parade.

Following the parade, many participants will head to Via San Giovanni in Laterano, dubbed Rome’s gay street, to continue celebrating in its many gay bars.

The bars and clubs will host special events that extend the festivities well into the night when the whole street normally becomes one big open air party.

The events will last a little over two weeks and will include sports tournaments, conferences, readings and lots of parties.

The main events will take place during the first weekend of July. This sees the renowned CSD Street festival where the boisterous celebrations are spread throughout several of the city’s squares. The Pride Parade, another highlight of the festivities, will take place on July 3rd.

The Polish city will see a particularly special Pride this year, as it hosts not only Warsaw Pride but also Kyiv Pride. In a gesture of solidarity with Ukraine, the participants of both events will march together in Warsaw.

The Equality Parade, which has been held in the capital since 2001, is the largest gay pride parade in central Europe. It sees thousands of participants walking with rainbow flags. The event is also expected to draw some 80,000 visitors to the city.

The event is particularly important for promoting LGBTQ+ rights in a country where the community is faced with conservative laws and policies.

Finland is known for its policies supporting LGBTQ+ inclusivity so it’s fitting that Helsinki will host the country’s biggest LGBTQ+ human rights celebration in June.

The event has seen a massive growth in participants over the years, especially at the parade.

There will be a cultural programme filled with events throughout the week. The festivities culminate in the parade on July 2nd which now sees thousands of marchers. Following the parade, there will be plenty of parties to keep the celebrations going.

Alongside the main Pride events, there will also be a Youth Pride Week for 13-25 year olds. There will be various activities and events held in LGBTQ+ organisations and youth centres.