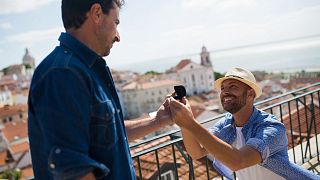 Proposing is a deeply personal matter. There’s no doubt that what you know about your other half should be the guiding factor in how you choose to pop the question.

Some fiancees might not mind a crowd, or even enjoy being part of a fairytale scene. While for others, the idea of having hordes of onlookers involved in the biggest decision of their life is a nightmare come true. As the mixed reaction to one man’s Birmingham train station proposal showed, complete with “Will U Marry Me” balloons on the concourse earlier this month.

Still, proposing on holiday is enduringly popular and can be as public or private as suits you both. If you’re thinking of taking a trip to ask the question, suit makers Charles Tyrwhitt have analysed thousands of different data sources to identify the most romantic locations to pull it off.

After sifting through numerous hotels, spas, Michelin-starred restaurants and couples attractions in each European capital, these are the places where love is most on the brain.

5. Cosy up in Helsinki’s saunas

A slightly surprising entry in the top five, the Finnish capital becomes more obvious the more you think about it. A winter wonderland is an ideal backdrop for some lovers. And Helsinki offers far more than just snowy vistas - with magnificent architecture and “intriguing” drinking and dining venues according to Lonely Planet.

It scored highly on couples attractions, including the iconic Löyly sauna and beautiful Kaisaniemi Botanic Garden.

4. Edinburgh offers a proposal with a view

Edinburgh's numerous spas helped catapult it into fourth place. It’s a much visited and loved city, and fond memories likely bring many courting couples back to propose. For Edinburgh lovers, it’s hard to think of a lovelier scene than getting down on one knee on Calton Hill, Arthur’s Sea or the Crags with such a magnificent view behind.

But if an open air proposal isn’t your thing, then there are plenty of gorgeous hotels and restaurants for an intimate moment too. Sheraton Grand Hotel and Spa and The Kitchen, serving fresh seasonal produce, are two of our favourite spots in Edinburgh.

3. Love is in the air in Madrid

For the art or food lover in your life, Madrid is an appealing choice. Love will certainly be in the air after an afternoon wandering around the Prado museum, or an evening indulging in tapas or fine wine.For a more scenic proposal spot, check out El Retiro Park - part of a UNESCO world heritage site.

2. Plan a picturesque proposal in London

London won’t set everyone’s heart racing, but with so many attractions it’s no wonder that plenty of proposals take place in the capital city. If it’s a picturesque backdrop you’re after, London has them in all shapes and sizes. From the pods of the London Eye, to the tip of the Shard, the benches of Hampstead Heath and the leafy elevations of the Sky Garden, there’s a spot to suit every couple.

1. Paris is undeniably the city of love

Bien Sur, Paris comes in at number one. They don’t call it the city of love for nothing. Beautiful boulevards, delicious food and a rich film history make it one of the world’s most romantic destinations.

Just bear in mind that if you book a trip to Paris out the blue, you might well be getting your partner’s hopes up. So don’t get cold feet on the Champs-Élysées.