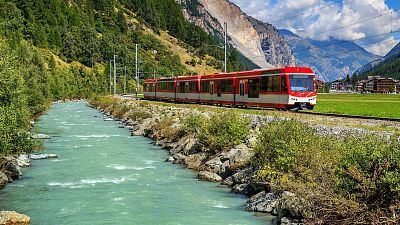 With a rail network stretching more than 200,000 km, Europe is a paradise for train travellers.

For generations, thousands of visitors have seen the continent through a train window thanks to the beloved Interrail pass.

Still more will take to the rails this summer, after snapping up a half-price rail pass in Interrail’s flash 50 year anniversary sale earlier in May.

The big question is - where to go?

There are thousands of possible routes, from the fjords of Norway to the beaches of Greece.

If you have one month, here’s a guide to help you pack in some of the best that the continent has to offer. For those who weren’t lucky enough to snap up a discounted travel pass, train prices are included.

What is an interrail pass?

The rail pass is available to both European residents and non-Europeans who are legal residents. You can board most trains by showing staff your Interrail pass on your phone and prices start from €185 for two or more countries.

There are different pass options available, but global pass holders - the type of ticket offered in the sale - can visit more than 40,000 destinations in 33 different countries.

All of the journeys below can be done on an Interrail global pass.

Amsterdam, the bike friendly, canalside capital of the Netherlands

Amsterdam is the perfect city for kicking off your rail adventure. Unpack a picnic in the sprawling Vondelpark, marvel at masterpieces in the world famous Rijksmuseum, or lounge in one of the city’s famous cafes.

Locals love to cycle. In fact the city boasts 2.5 bikes per person - though a fair few of them will be at the bottom of a canal. Hire some wheels to explore the city’s network of winding canals, or pedal along the Amstel, running past the Jewish Quarter, Hermitage Museum, and Magere Brug bridge.

Dance the night away in Berlin, Germany

How to get there: From Amsterdam, take the direct intercity train to Berlin (6.5 hours).

Berlin has something for everyone. Want to party all night (and all of the next day)? The city’s club scene hosts some of the most famous dance clubs in the world. From throbbing techno beats in a converted warehouse to mellow jazz bars, you’ll be spoilt for choice.

History buffs can walk the length of the Berlin wall, the concrete barrier that once divided the city between the Soviet East and capitalist West. The wall fell in 1989, but a 0.8 mile stretch remains - the world’s largest (and longest) open-air art gallery.

How to get there: From Berlin, catch the EuroCity bullet train to Prague (4 hours 30 minutes). €38

Colloquially known as the ‘city of a hundred spires,’ this scenic UNESCO listed city has served as the backdrop to Hollywood blockbusters like ‘Casino Royale’ and ‘Mission Impossible.’

Enjoy a craft beer in the shadow of Romanesque, Gothic, Renaissance and Baroque architecture, or wander the Palace Gardens below Prague castle. With museums on everything from the KGB to Kafka, you certainly won’t be bored.

Hear the sound of music in Salzburg, Austria

How to get there: From Prague, catch the Czech intercity train to Linz, then take a Railjet train to Salzburg (total journey is 6 hours). €25

Nicknamed ‘the Stage of the World,’ this charming Austrian town was the birthplace of Mozart and the setting of the Sound of Music.

Wander in the beautiful geometric gardens of the Schloss Mirabell, or check out the Imbergstieg. Colloquially known as ‘the “Dark Staircase’ these steps wind down from the park at Kapuzinerkloster Monastery to street level in the UNESCO-listed Old Town.

Swim in the serene glacial waters of Lake Bled, Slovenia

How to get there: From Salzburg, take a OBB train to Villach HBF, then change for the train to Bled (4 hours total).

After weeks spent in packed cities, enjoy the clean air and breath taking scenery of Lake Bled. Swim in the lake’s crystal-clear waters and explore the enchanting island in the middle of the lake.

Step away from the crowds in Venice, Italy

How to get there: From Lake Bled, take a regional train to Villach HBF, then change for a train to Venezia S. Lucia

However, there are still ways to enjoy the winding canals and broad piazzas responsibly. Wander the tightly packed backstreets and buzzing piazzas, but avoid the gondolas that clog the city’s waterways. If you want to grace the waters of the Grand Canal, join the city’s residents on the public vaporetto system (at about a tenth of the price of a gondola ride). Ditch badly made souvenirs in favour of artisan products made by Venetian craftspeople.

Why is train travel getting so popular?

Not only will you dodge the chaos and cancellations plaguing European airports, but you’ll travel with a clear conscience.