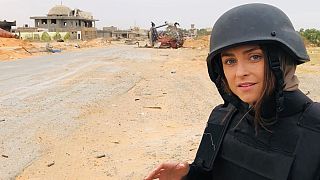 Welcome to Euronews Travel’s Women Beyond Borders, the series which brings you real life accounts from women around the world who are living brave, adventurous lives, and conquering personal challenges on the road.

Nominated for an International Emmy Award for News & Current Affairs for her unique coverage of the Taliban takeover of Afghanistan in 2021, Anelise Borges is Euronews' international correspondent.

Anelise has been working in the field for 10 years. In 2018 she joined Euronews, reporting firsthand on major stories across the world and venturing headfirst into ongoing conflicts.

At the end of 2021, Anelise was positioned in Afghanistan to report, from the ground, on the Taliban takeover. Over the course of her career, she has reported from more than 30 countries, covering war and dictatorships from some of the world’s most dangerous zones.

But as she explains in our interview, it’s not necessarily about the heart-stopping moments of fear or the risk that made this work so appealing to her.

She explains, “I don't actually seek war and destruction and sadness. I go after the resilience and these crazy stories of just overcoming all these difficult obstacles.”

What is it like being a journalist in a warzone?

According to Anelise, journalists have it easy. She explains, “Most of the time, 99 per cent of the time, the story's always much more dangerous for the people that are stuck in that story.”

“[The people], they were the ones that were truly risking something. I was there because I wanted to be there. I chose to be there and I could leave whenever I wanted.

The advantages of being a female reporter

We all know there are some places in the world which are safer for men than for women.

We ask Anelise how being a woman has impacted her. She believes it actually helps.

“I think women inspire trust and that has helped me a lot throughout the years. People have been more prone to welcome me to their homes, for example, and share with me some of the difficult stories that they had.”

In some cultures, Anelise believes it has helped her gain access to speak to women that she wouldn't have been able to, were she a man.

How to become an international correspondent

Anelise's biggest tips are: to listen - and to speak.

“Learn different languages. It helps enormously when you can communicate with people,” she advises.

“And listen, listen to the stories around you. You don't need to go to a war torn country to come across some extraordinary people.

*Press play on the video above to find out more about Anelise’s award-winningwork.*

Who won big at the 2022 International Emmy Awards?

Who emerged victorious at the 2022 Emmys?