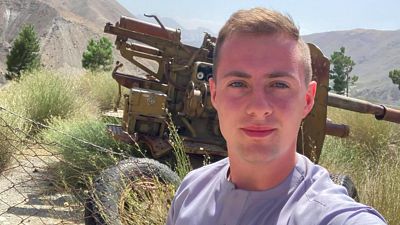 While many Ukrainian expats in Europe and the UK are considering returning to their homeland to fight Russian forces, one British man is flying to the country ‘for fun’.

Miles Routledge, a 22-year-old physics student, has a history of flying out to warzones. In August 2021 he was rescued from Kabul by British forces after flying to Afghanistan for a holiday - shortly before it fell to the Taliban.

Miles claims he will be trying to help when he reaches Ukraine, telling his followers on Twitter:

“Ok guys I've got a team of veterans together from across the world flying in, I've got some medics setting up a medical centre and safe house on the polish border and I'll be riding with a team in ukraine. I'll put up a charity event with proof of work done to help Ukrain (sic)!”

However, in a recent interview with student newspaper The Tab he shared,“it’s honestly fun, almost like a soldier enjoying it despite what’s going on.”

Miles, who has over 73,000 followers on Twitter, raises money for trips through crowdfunding sites like Go Fund Me. His latest crowdfunding effort states that the money will help “save two families” though he doesn’t reveal from which country. He has even made himself a fake press pass too.

While many consider Miles’ actions naive, if not completely disrespectful, they are part of a growing trend. Disaster tourism, or dark tourism, have become increasingly popular in the past decade, with increasing numbers of people visiting sites of previous or ongoing atrocities.

What is dark tourism?

Dark tourism involves visiting sites that have previously been associated with death and tragedy.

The most famous of these are sites linked to the Holocaust, including Auschwitz and Bergen Belsen in Germany.

While it is regarded as holding enormous historical and educational value, in recent years the Auschwitz Museum has had to ask people to stop taking selfies on the site.

While it is regarded as holding enormous historical and educational value, in recent years the Auschwitz Museum has had to ask people to stop taking selfies on the site. It states on Twitter:

“When you come to @AuschwitzMuseum remember you are at the site where over 1 million people were killed. Respect their memory. There are better places to learn how to walk on a balance beam than the site which symbolises deportation of hundreds of thousands to their deaths.”

In 2018, survivors and residents of the Grenfell Tower fire in London, UK, had to put up posters around the site reminding people that the tower was a tragedy and not a tourist attraction.

Local residents are angry over 'grief tourism' at the Grenfell Tower site https://t.co/8tcXesJ1Kqpic.twitter.com/lWcofp9IIZ

Is disaster tourism a different thing?

Though similar, disaster tourism involves visiting locations where an environmental disaster, either natural or man-made, has taken place. Generally, this involves visiting the sites of volcanic eruptions or floods, but the Chernobyl nuclear disaster also fits into this category.

Generally, this involves visiting the sites of volcanic eruptions or floods, but the Chernobyl nuclear disaster also fits into this category.

On 26 April 1986, Chernobyl’s No. 4 reactor exploded after a routine safety test went badly wrong. Thirty people died in the immediate aftermath of the accident and figures on radiation-related deaths have since been hotly contested.

As a result of the nuclear fallout, a 2,600 km² Chernobyl exclusion zone was created.

In recent years, tourism to the exclusion zone has become increasingly popular, both for Ukrainians and foreign nationals, making Chernobyl Ukraine’s most popular tourist attraction.

A few weeks ago I got the once-in-a-lifetime chance to visit the Chernobyl nuclear power plant in Ukraine. Unfortunately the future of tourism to the abandoned playground is bleak. pic.twitter.com/psyhAEjbzF

120,000 people visited in 2019, a figure bolstered by the release of HBO’s Chernobyl drama. The increase in interest led the Ukrainian Government to begin the process of seeking UNESCO World Heritage status for the area.

“We believe that putting Chernobyl on the UNESCO heritage list is a first and important step towards having this great place as a unique destination of interest for the whole of mankind,” Ukrainian culture minister Oleksandr Tkachenko told Reuters in 2021.

At the time of the Russian invasion, the application is still pending.

Will Miles be called out for his actions?

According to his Twitter account, Miles has arrived at the Polish border and made it through thanks to his fake press pass. He is expecting to reach Ukraine tomorrow (25 February).

Polish border control looking at my Afghanistan visa "why did you go here?" Very suspicious.

Many on the social media platform do not find Miles' exploits so amusing though, and he has been condemned by British military veterans and even his own friends. One of whom told the Telegraph back in August that he was a “massive attention-seeker.”

A veteran of the British Army has emailed @GBNEWS & says he thinks @LordVesconte actions are naive & dangerous. War is brutal, unforgiving & doesn’t recognise a cheeky chap as special

It remains to be seen if he will need to be rescued from the country, as happened in Afghanistan.

Euronews have reached out to Miles Routledge for comment.