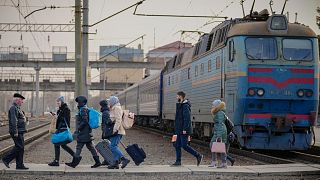 As the Russian invasion of Ukraine enters its second day, thousands of refugees from the besieged nation are arriving in bordering countries by road and rail.

Poland is a key destination for many Ukrainians hoping to escape the Russian military, with the border town of Medyka offering direct access to people travelling by bus or foot.

Polish officials say the country will open nine reception centres along its 535-kilometre long border with Ukraine, anticipating an influx of refugees in the coming days.

The announcement on Thursday came as the United Nations warned that the Russian invasion would have “devastating” humanitarian consequences for those fleeing the violence.

Vitalii Koval and Oleksandea Brechkoi are two of those seeking refuge from the fighting.

Along with their five-month-old son, they are travelling to Poland to stay with friends.

"We leave our two dogs there because we were not in time to make them a passport or permission," says Vitalii.

"We are now thinking about what to do next and in the end probably going to Wrocław to take a deep breath there and decide what to do."

As well as crossing the border on foot, Ukrainians are using trains and cars to flee the ongoing conflict.

Large traffic jams were seen in Kyiv on Thursday, as citizens attempted to escape the city ahead of the approaching Russian forces.

"My husband told me that I am panicking and it won't happen," says an unnamed Ukrainian woman, taking her two children across the border into Poland.

"Now it's true, and this is absolutely incredible."

As many as 100,000 Ukrainians were internally displaced on the first day of the invasion, according to a report by The Guardian.

Many more are expected in the coming days.