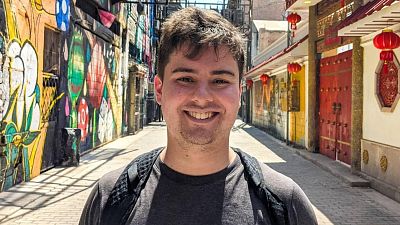 Arieh Smith has earned almost 10 million followers thanks to his videos about learning languages   -   Copyright  @xiaomanyc
By Hannah Brown  •  Updated: 14/03/2022

Meet Arieh Smith, also known as @Xiaomanyc, a YouTuber and content creator with almost 10 million subscribers across his channels.

Arieh lives in New York and is best known for his videos surprising people with his language abilities. And it’s not just your classic French and Spanish - though he does speak excellent Spanish - Arieh has mastered Mandarin Chinese and dabbles in Yoruba, Navajo, Fuzhounese, Wolof, Hindi and countless more.

So what’s his secret?

Discovering his love of languages

Arieh grew up in your average family. Just one language was spoken at home and he wasn’t particularly interested or successful in the languages offered at school.

After he finished high school though, Arieh was looking for something interesting to do during the summer and found a flyer for free Mandarin Chinese classes. After learning some basics and practising in New York’s Chinatown, he was hooked.

“I think the reason why I continued studying it to the extent that I did was [...] I got very positive feedback from Chinese people, very early on,” Arieh tells Euronews Travel

While in college, Arieh continued his studies and earnt a scholarship to spend a year studying in China. This included a two month programme with other American students where they were forbidden from speaking to each other in English.

“I tried to create a true immersion environment for myself. [...] I was at a university in Beijing that had a lot of foreign students but I really tried to segregate myself and I said, right, I’m only going to hang out with Chinese people,” explains Arieh.

Why learn a language?

Learning a language not only opens the door to easier travel , it also creates a deeper understanding of a country and its culture.

“I think people want their culture to be seen and heard,” says Arieh.

“I think if you know how to say something in their language - or if you even know that their country, culture and food exist - it’s a sign of respect and people really appreciate that.”

How to start speaking a new language

First of all, you need a reason to do it. Maybe you’re going on a big trip or want to move abroad, or maybe you want to read your favourite book in its original language. Whatever it is, find your reason.

According to Arieh, when he first starts with any language he has a list of phrases that he always learns and commits to memory:

Arieh thinks, if you want to speak, don’t worry about studying grammar intensely, just practise speaking and the mechanics of the language will come naturally.

And frankly, how often when you’re in the supermarket abroad do you need to tell someone you have green eyes, straight brown hair and two brothers? Forget your school textbook, focus on the useful stuff.

“I think travelling is so cool because it really makes things stick in your brain a lot better, so if you can combine both language learning and travelling, I think it’s really the best thing.”

Watch the video above to see more from Arieh.

A top travel influencer shares tips on getting started

Extreme skiers close out the 2022 season with a colourful show

This freerunner scaled Sydney Opera House and the views are incredible

Pitch-perfect: Why tent sharing could be the future for camping