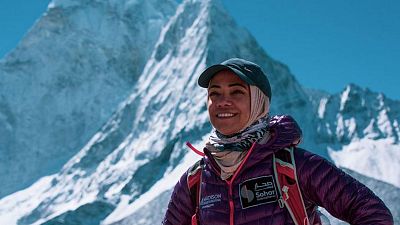 Welcome to Euronews Travel’s first video series, Women Beyond Borders, with which we are bringing you first-person stories of women around the world who are living brave, adventurous lives, and conquering their own personal challenges on the road. These women live for travel and adventure. While some are crossing the world in pursuit of the most unique experiences, or pursuing a lifestyle that many would dream of, others are breaking the mould of traditionally male-dominated industries. We want our series to inspire you to believe in the power of your own dreams.

This week’s Women Beyond Borders traveller has reached incredible heights as the first Omani woman to climb Everest.

It was May 2019 when Nadhira Alharthy reached the top of the world. Her trainer, Khalid Al Siyabi, had reached the summit nine years prior as the first Omani man to do so. Following in his footsteps, her training involved running for 50km at a time and swimming for up to four hours a day.

Sadly, Al Siyabi passed away a few weeks before Alharthy reached the top of the mountain. She heard the news while she was at Everest base camp. When she reached the top, Alharthy held the Oman flag and a paper which read: ‘In memory of Khalid Al Siyabi’.

What kept her going?

During her interview, Alharthy talks about the controversies she was up against - namely, her family and friends’ concerns for her safety. She says that she had to be a friend to herself and trust in her dreams.

Her advice to fellow explorers is, “travel to follow your dreams, and you will find them. And don’t wait, even for one day or one minute.”

Come back to Euronews Travel every week to meet more incredible women who take on the world.

This woman spends her days dog sledding in the mountains