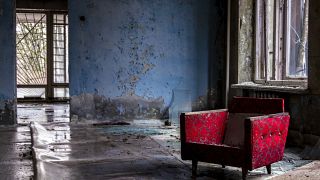 Constantly on the move, Maxime is a young photographer with a passion for discovery. Born in 1990, he started by borrowing his dad's reflex camera when he was a child in order to immortalise his close friends. Photographing friends during their BMX practice, this first experience would inspire him to capture light and its reflections on a wide variety of subjects.

Studying initially to be a mechanical engineer, Maxime changed his career path in order to study cinema and more broadly, audiovisual arts. He was always particularly fascinated by cinematographic aesthetics. His photographic practice later evolved through extensive travel, capturing the regions he visited during many trips around Europe and the rest of the world.

So far, in constant search of wide open spaces and enchanting atmosphere, Maxime is now moving towards a more narrative approach. The artist currently works on new projects with a social or historical dimension, with political and economic landscapes providing the backdrop to his work.

In 2017, Maxim made a series of post-apocalyptic images in the Ukrainian city of Pripyat, near the sarcophagus of the Chernobyl nuclear power plant, where the worst nuclear disaster of the 20th century happened in 1986.

How did you start as a photographer?

Quite simply, I have been immersed in photography since I was a child. My father who was always a big fan of photography introduced me, just as his father did with him. Through various quests, I gained the ability to focus my gaze. I have been trying for a few years now to develop a narrative point of view that allows me to tell the story of the scenes I come across as accurately as possible.

What are your travel essentials and which device do you use?

For a trip, I take the camera of course and very often a laptop too. The laptop I bring for convenience, so I can transfer the files and back them up on the cloud, although in some locations it’s difficult to access the Internet.

The camera I always bring is my Canon 5D Mark 4, with an 18-35 and a 24-105 zoom. I just bought a small X100F from Fujifilm as well, to make it easier to take street pictures. Lighter and more intuitive, it allows me to be more discreet than with the massive Canon!

What do you wish you had known when starting out as a photographer?

I think that knowing how to build a narrative in a structured manner would have been of great help since sometimes the theme is difficult to discern and therefore represent. Taking a good picture is easy, but knowing how to think in series, like in a film, requires a much more rigorous approach.

How would you describe your style?

I have been leaning naturally towards photojournalism for a few years, but I remain very attracted to landscape photography. I like the “frozen moment” of a particular landscape or a street scene.

What or where do you like to photograph best?

I love to photograph a wide variety of things and finding new themes is essential. My personal curiosity allows me to stay alert and as soon as an object comes into light in my head, I naturally focus on it and try to clarify the story. As a result, I do not have a preference photographing anything in particular, but a new theme is always a challenge.

What is your favourite place in Europe and why?

Good question, there are many beautiful places in Europe. We are fortunate to live in a period where, despite the nationalist impulses we all know of, we can travel without limitations.

I think that if I had to name a place, I might say Ireland or Scotland. The local myths and depth of their histories fascinate me. I particularly love the green meadows and large lakes that punctuate these landscapes. They are ideal for daydreaming.

What is your most memorable picture?

It's a very simple picture, which I didn't take. This memory is always with me, I would almost say as an obsession!

It was in Amsterdam, in a park, on a bright afternoon. An ice-cream street vendor all dressed in white passed by with his cart. I took out my camera, adjusted the focal range and started waiting for a crucial moment. The green grass was perfectly pruned, the children playing around, the white birch-trees stretching their long shadows in that late afternoon.

Suddenly, however, a gust of wind came and blew a white parasol away from the ice-cream vendor. I “pulled the trigger” at that exact moment. Unfortunately, however, once back home, when I sent the film for development, it was damaged, and I didn't get a chance to enjoy the image.

Is there anything you would never want to photograph?

At the moment, I don't think so. In my approach, which is that of a photojournalist, I think that everything I witness must be told. So, even if I don't really like the idea of facing death, especially in a war zone, I think the only limits I have will be the ones that arise in the moment.

However, it is true that I like to set a certain distance, which corresponds to my personal boundaries about respecting of my subject. I think it is possible to say something with any image, you just have to be at the right distance so that the message doesn't drown in sentimentalism, which is provoked unless fully assumed!