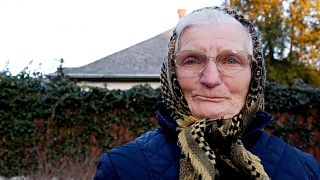 80-year-old grandmother Piroska Baksa walked for seven hours to escape the fighting in the village of Chomonyn   -   Copyright  AP
By Ben Anthony Horton  with AP  •  Updated: 01/03/2022

More than half a million people have fled Ukraine since Russian forces invaded the country last week, according to the United Nations.

Among these is Piroska Baksa, an 80-year-old grandmother from the village of Chomonyn who walked for seven hours to escape the fighting.

Born in 1942, she hiked across the Hungarian border along with her daughter and 14-year-old granddaughter on Monday - despite being initially reluctant to leave her home.

"I felt that I didn't want to come at any cost. You've got to leave your house, everything," says Piroska.

"My daughter has a dog, but we had to set it loose. There's no one to leave it with, everyone is leaving."

Hungary opens its borders to Ukraine

As Russia's war in Ukraine continues, more than 70,000 refugees have crossed into neighbouring Hungary.

The landlocked nation has pledged to keep its borders open for those fleeing the invasion.

“We’re prepared to take care of them, and we’ll be able to rise to the challenge quickly and efficiently,” Viktor Orban, Hungary’s Prime Minister, said in a statement.

I wouldn't have come, but they love me, so I had to go.

But despite promises of food, shelter and aid, it was Piroska’s family that convinced her to make the seven-hour hike.

“My little granddaughter was crying that they should bring me along at any cost,” says the pensioner.

Piroska’s daughter, a seamstress, and granddaughter, a high-school student, are escorting her to safety in Budapest, where she will be able to stay with family.

On the journey, Piroska recounted the horrors of the Second World War, where bombings devastated towns and cities across Ukraine.

You can't plant an old tree in a new place.

Much like then, she fears this war will cause people to flee the region altogether, leaving no one to tend to the fields.

For now, she remains one of many elderly Ukrainians forced to leave the only home they have ever known.

"I can't fall asleep in a strange place," says Piroska, before setting off on the next leg of her journey.

"You can't plant an old tree in a new place, it will dry out. This journey is hard on me."

Watch the video above to find out more about Piroska’s journey.