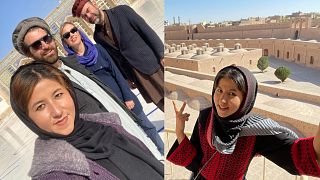 “When I decided to be a tour guide, I had to talk to my parents first”, Fatima tells Euronews Travel.

“My father was straight away angry and he was telling me, 'Fatima, are you crazy? Are you going to carve your own grave? It's dangerous for you. You are a girl, you cannot do this'.”

But what a girl should or shouldn’t do has never stopped 23-year-old Fatima Haidari from following her dreams.

No school for girls

Fatima lived in a small village in Ghor Province until she was 10 years old. Girls didn’t have the opportunity to go to school, even the boys who were allowed to be educated met with their teacher under the shade of some trees by the river instead of a classroom.

As the youngest of seven siblings, Fatima’s role was to tend to the family’s sheep and cows. However, as soon as she understood what education meant, she was determined to find a way to get it for herself.

The fact there was no school building in the village, worked in Fatima’s favour. She could bring her cows and sheep down to graze on the pastures by the river and at the same time, hide and listen to the boys’ teacher.

At the age of 10, she and her family were forced to leave their home and move to Herat, a major city in the West of Afghanistan. There they lived in an old house with no windows or doors which had been destroyed by the Taliban 20 years earlier.

“My father was only a simple worker. He could only afford very simple food for us to not die of hunger,” Fatima explains.

Without formal documents, she couldn’t attend a government school and without money, she couldn’t afford a private school. For 3 years, she stayed at home making handicrafts so she could buy books.

“Just seeing the beautiful girls wearing beautiful uniforms, in a way that made me cry. ‘Why? Why can't I go? What is the difference between me and them?’” Fatima recalls.

“In a way, they motivated me to do something for myself and to not just sit at home.”

With a fire lit inside her, Fatima began working day and night to produce more handicrafts to sell. Eventually, she saved enough money to be able to pay to go to school.

Once at school, Fatima studied hard and was able to attend a programme that taught English to refugee girls. Within eight months, she was fluent and her school invited her to become an English teaching assistant.

The money they paid her meant she could afford to stop making handicrafts, continue at the school and buy the books she needed. And with more time to study, she continued to work hard and eventually passed the university entrance exam.

Fatima’s chosen field was journalism, something her parents weren’t too keen on.

“My father was telling me, 'You have to be a doctor’,” says Fatima.

“My mother was telling me, 'you have to be a teacher because this is good for girls. Journalism is for boys’ or ‘it's dangerous for a girl'. But I saw my future in journalism.”

Finding her path to tour guiding

Whilst studying at university, Fatima was given an assignment to research Afghanistan's tourist sites and history. She focused on the city of Herat.

As a way of both practising her English and sharing what she learnt, Fatima started to post on a travel diary group on social media. Her posts soon attracted attention and before long she received messages from tourists asking if she would have time to show them around her city.

In the weeks that followed, she was contacted by Untamed Borders, a travel company specialising in adventure or ‘off the beaten path’ travel. They had heard about her talent, passion and knowledge of her city and after a chance to show off her skills, they offered her a job as a tour guide.

“I was not sure if I would be accepted or not because I was not trained,” Fatima explains.

“So that one day, actually, that was very important for me to succeed.”

As well as building a career and becoming the first female tour guide in Afghanistan, Fatima wanted to help empower other women in a similar position to her.

With a group of friends, she established an organisation to help teach young women and girls to speak English. Using donations from local people, they gathered the equipment to set up their organisation.

Funding from another organisation meant they could also pay their teachers - and Fatima could pay her university fees.

Until she had to flee in 2021, Fatima also presented a radio show called Winner Women which, like Women Beyond Borders, shared the story of brilliant and inspiring women.

“When a woman in Afghanistan wants to be someone, she has to fight,” Fatima says.

“I remember the days when there were so many children hitting me with a stone or the days that people on the street were watching me strangely, as if I have done so many wrong things and [...] telling so many bad words to me, insulting me.

I was telling myself, ‘Fatima, what they are doing is just asking you to be stronger, to work harder.”

‘A changer not a victim’

Right now, Fatima is living in Italy. When the Taliban took control of Afghanistan in 2021, she had to flee the country.

She is continuing her studies and enjoying the opportunity to travel, learn and explore the world.

But for Fatima, it was never a goodbye forever to Afghanistan and she waits for the day she can return home safely.

“I really thank the Italians who just opened their hearts to me and treated me like a human being,” she tells Euronews Travel.

“What I want now going forward is just change as my motto is 'a changer and not a victim'.”

Looking to the future, Fatima is dreaming big. She still wants to be a journalist, covering stories about women in Afghanistan. She wants to set up her own tourism company, training and empowering female tour guides.

“I will learn so many things and then I will apply all I learnt there in Afghanistan.”

Watch the video above to learn more about Fatima’s incredible journey.