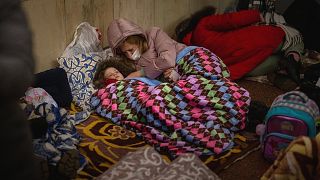 With 80 distinct mosaics, colourful stonework and swinging chandeliers, Kyiv's network of 52 metro stations is often regarded as one of the most impressive underground systems in Europe.

But as Russian forces close in on the capital city, many Ukrainians are now taking shelter in the Soviet-era stations - hoping to avoid the blasts of incoming missiles on the streets above.

"I'm here because I think it is one of the only places right now where you can hide in Kyiv," says Bogdan Voytenko, a resident in the Ukrainian capital.

"All of the other places are terrifying."

First opened in the 1960s, Kyiv's metro system is home to an assortment of historical relics dating back to the Soviet era.

Zoloti Vorota - one of the grandest stations within the city’s underground network - boasts 80 stunning mosaics spread across a series of platforms, hallways and passages.

Each artwork depicts a scene from the history of Kievan Rus - the federation of East Slavic, Baltic and Finnic peoples who made Kyiv their capital in the late ninth century.

For now, these once popular tourist hotspots are becoming makeshift bomb shelters, as Ukrainians seek to protect themselves from the barrage of missiles raining down on the city.

"Nobody believed that this war would start, and that they would take Kyiv directly," says Anton Mironov, another man sheltering in the metro station.

"In general, I feel mostly fatigue. None of it feels real. I don't even know how to relate to it."

Locals have brought nuts, dried fruits and sleeping bags with them to make their stay as comfortable as possible.

Euhenia Lysenko and Anna Dudka, two best friends who decided to shelter together, remain shocked that Putin has launched a "full-scale invasion" of their city.

"In the morning, there was total panic," says Dudka.

"Hysteria. Tears. Fear for your relatives, for your loved ones. And it wasn't clear what to do, where to run, or how to behave."