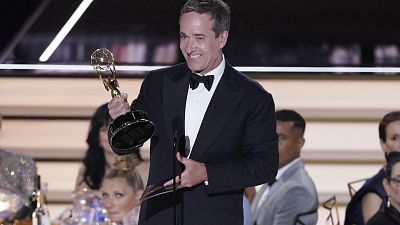 The 74th Primetime Emmy Awards returned this year, back in full swing with red carpet attendees and a full studio audience at the Microsoft Theater in Los Angeles, following 2021’s more restrained ceremony.

Saturday Night Live cast member Kenan Thompson hosted a ceremony which saw favourite shows such as Succession and Ted Lasso face off against a crop of newcomers and first-time Emmy contenders like the wonderful Abbott Elementary and South Korean dystopian drama Squid Game.

The winners this year were something of an even split, even if there were few upsets or huge surprises.

Clear favourites and veteran shows proved they weren’t going to be edged out by the newbies. Case and point: HBO’s Succession beat Netflix’s Squid Game in the Best Drama category, while Ted Lasso and The White Lotus took home several top awards and emerged as the evening's main winners.

Many were expecting Squid Game, which holds the title of Netflix’s most watched series to date, to make history by becoming the first non-English series to win the Emmy’s Outstanding Drama Series category.

Sadly, it wasn’t to be, as the beloved show Succession won out once more.

The show, about a media mogul and his dysfunctional family fighting for power, tallied 25 nominations this year, the most of any series. Succession previously won Best Drama in 2020. It won three awards last night: Best Drama, Best Writing for a Drama Series and Best Supporting Actor in a Drama Series for Matthew Macfadyen.

“It's such a pleasure and privilege for me to play this bonkers gift of a role in this wonderful show,” Macfadyen said when accepting the trophy for his role as a scheming member of the media empire family.

The series is a capitalist parable that follows Seong (Jung-jae) and hundreds of other contestants burdened with significant debt as they compete in disturbing and violent children’s games for millions of dollars. But chances are you've already seen it...

The show stars Jason Sudeikis as the fish-out-of-water coach of an American football team managing a football club in England. It focused on mental health and its characters’ pain in its second season, and was rewarded for it by Emmy voters. Ted Lasso beat out competitors including Barry, Hacks, _Curb Your Enthusiasm_and What We Do in the Shadows.

“Thanks to the people who watch this show and dig it as much as we dig making it,” he said.

“Thanks for making such a safe space to make this very difficult show,” said Zendaya, a two-time winner for Euphoria, the drama series about teens and their drug and sex-fuelled coming-of-age.

“My greatest wish for ‘Euphoria' was that it could help heal people. Thank you to everyone who has shared their story with me. Anyone who has loved a Rue (her character) or feels like they are a Rue, I’m so grateful for your stories, and I carry them with me.”

Ralph was a first-time nominee at the age of 66 and she relished in her victory by powerfully delivering an acapella version of the song ‘Endangered Species’ by Dianne Reeves, belting: “I am a woman, I am an artist / And I know where my voice belongs.”

“To anyone who has ever, ever had a dream and thought your dream wasn’t, wouldn’t, couldn’t come true, I am here to tell you that this is what believing looks like,” Ralph declared before pumping her fist. “This is what striving looks like!”

Ralph’s win comes after decades in the business with multiple iconic roles – from Dreamgirls on Broadway in the 1980s, to stepmother to the title character on the 1990s sitcom Moesha.

In an interview with the AP, Ralph relayed excitement about diversity at the Emmys, praising the Korean language Squid Game, as well as her own show, which has a majority-Black cast.

“The fact that this is the first time since the 1980s that people in a majority Black cast have all been nominated, the first time in 40 years,” Ralph said. “The fact that it is my first nomination, my first invitation to the awards and guess what? Nothing before its time. Everything is right on time. And I’m happy to be here because I’m sailing, baby. I’m loving it.”

The rise of The White Lotus & John Oliver does it again

At the end of the ceremony, this year’s biggest winner was The White Lotus, which won five Emmys: Best Limited or Anthology Series, Best Writing and Best Directing for Mike White, Best Supporting Actor for Murray Bartlett and Best Supporting Actress for Jennifer Coolidge.

Coolidge was a first-time winner, revealing that she “took a lavender bath tonight (...) and it made me swell up inside my dress, and I’m having a hard time speaking,” before dancing through the play-off music.

The White Lotus follows the guests and employees of the fictional White Lotus resort chain, whose stay becomes affected by their various dysfunctions. It was originally intended as a six-part limited series, but due to critical acclaim and high ratings, HBO has renewed it as an anthology series, with a second season scheduled to premiere in October 2022.

Lastly, and for the seventh year in a row, HBO’s Last Week Tonight with John Oliver won best variety talk series as well as the genre’s writing award.

The 2022 International Emmy news and current affairs categories will be presented on 28 September in New York City. Nominations include ITV News: Storming of the Capitol, which had an ITV News team embedded in the mob that stormed the U.S. Capitol on 6 January; Afghanistan: Taliban Takeover, Al Jazeera English’s report on the Taliban taking control of Kabul in August 2021; and Afghanistan Crisis: News Coverage, from Euronews as correspondent Anelise Borges, who captured the chaotic US withdrawal from Kabul using just an iPhone.

What are the key takeaways from this year's Emmy nominations?