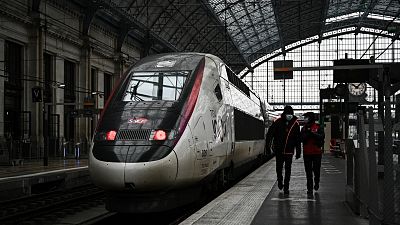 French rail operator SNCF and Deutsche Bahn are planning to launch a direct high-speed train between Paris and Berlin at the end of 2023.

The new rail line was announced on Tuesday by the head of the French company, who came to Strasbourg to celebrate 15 years of Franco-German high-speed cooperation.

"It makes sense because we see that people are accepting longer and longer journeys. There are really people who are willing to spend five hours, six hours, seven hours on a train," he explained.

"In this case, Paris-Berlin is seven hours."

"A few years ago, we thought it was a little long and we were afraid we'd have no one. There are more and more people for whom this is not a problem, so much the better!" he said, stressing, that "taking the train is a way to reconcile mobility and nature protection."

How many trains will run between Paris and Berlin?

To start with, there will be one return trip per day on this link via Frankfurt. It will be operated as a partnership between the SNCF and Deutsche Bahn with German ICE high-speed trains, according to Alain Krakovitch, director of TGV-Intercités at the SNCF.

In the future, a second daily round trip could also be completed with French TGVs (high-speed trains), he added.

"It is quite symbolic of the evolution of our society, and the fact that many of our fellow citizens prefer the train," said the manager.

"The observation we make today is that Paris-Milan and Paris-Barcelona have amazing occupancy rates: on Paris-Milan, the offer has doubled with the arrival of Trenitalia (the Italian public company, which came to compete with the SNCF TGV in December), and despite that, the trains are full," he explained.

"We should be able to have the same thing on Paris-Berlin."

The daily TGV linking Frankfurt to Marseille via Strasbourg and Lyon has been a success, Mr Krakovitch said.

Day and night trains between Paris and Berlin

The Paris-Berlin daytime high-speed train will be in addition to a night train connection between the two capitals. It will be operated by Austrian railroads ÖBB in cooperation with SNCF and Deutsche Bahn and will also start in late 2023.

"It will be at the same time, the night train and the day train. We will have the choice according to taste," Jean-Pierre Farandou said.

"I am convinced that we need more railroads in Europe and a strong Europe needs a strong interconnection on the rails,"  his colleague from Deutsche Bahn, Richard Lutz echoed.

The development of railways is "essential to achieve the climate objectives," he stressed.

SNCF and Deutsche Bahn have been running high-speed trains, TGV and ICE, between France and Germany since the opening of the first section of the Paris-Strasbourg high-speed line in June 2007.