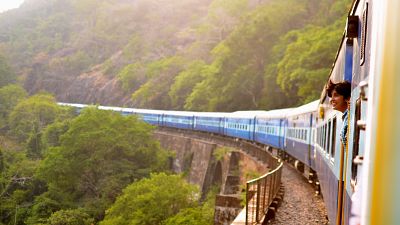 These breathtaking train journeys are an alternative to road-tripping that is much easier on the wallet.   -   Copyright  JK
By Rebecca Ann Hughes  •  Updated: 28/06/2022

Train travel is on the rise in the US and these scenic routes make for a memorable 4 July trip.

Swapping the car for the train means you can dedicate your time fully to enjoying the stunning landscapes out the window.

It’s a great eco-friendly alternative to the traditional American road trip and as gas prices continue to soar, it’s also a great option for your wallet.

Here are seven routes that pass by some of the most iconic sights in the US.

Wind through the Pacific Northwest with the Amtrak Cascades

Named for the Cascade mountain range running alongside some of the route, this four-hour journey is one of the most spectacular in the US.

The trip begins at Eugene in Oregon and cuts through lush green forests to reach Seattle. From there, the train travels along Puget Sound where passengers can look out over the ocean and get a glimpse of the Olympic Mountains.

Dream through the desert on the Sunset Limited

Running between New Orleans and California, the Sunset Limited speeds through mesmerising desert landscapes on its 3,210-kilometre journey. From the windows, passengers gaze at vistas of dusty red rock formations and vast plains of the deserts of New Mexico and Arizona.

In peak seasons, national park guides hop aboard and explain more about the natural heritage to travellers.

Look out for eagles along the Grand Canyon Railway

The Grand Canyon Railways meanders for two hours and 15 minutes from Williams, Arizona, to the breathtaking South Rim of Grand Canyon National Park. The 105-kilometre route takes passengers through the Colorado Plateau with magnificent views of pine forests and prairies.

The journey is ideal for spotting wild animals like mountain lions, elks and bald eagles. Some of the historic train cars have glass-dome ceilings for 360-degree panoramas.

Lasting for about two and a half days, this is the second-longest train route in the US. The 3,924-kilometre journey begins in Chicago and ends up in Emeryville in California.

En route, passengers can feast their eyes on some of the country’s most spectacular natural sights including the Rocky Mountains, the Sierra Nevada and the plains of Nebraska.

The luxurious Napa Valley Wine Train rolls through the bucolic scenery of vineyards on its 58-kilometre journey. The three-hour round trip departs from Napa in northern California and ambles through Yountville, Oakville and Rutherford to St Helena.

Passengers can alight at renowned wineries for tastings but can also sample plenty of wine during the journey itself. The ticket also includes a gourmet four-course meal.

Journey along the Pacific coast on the Coast Starlight

Covering a distance of 3,566 kilometres, the Coast Starlight replicates a classic American road trip by train between Seattle and Los Angeles. Except seeing as no one has to be behind the wheel, everyone can enjoy the dramatic panoramas.

En route, the train zips by views of rugged cliffs, the San Francisco Bay and the snowy peaks of the Cascade mountains. There is a “sightseer lounge car” where all the seats are angled to look out the floor-to-ceiling windows.

Admire the great plains from the Empire Builder

The Empire Builder takes passengers on a 46-hour ride from Chicago to Washington. Along the 3,550-kilometre route, passengers drink in eight hours of non-stop cinematic scenery while crossing the Glacier National Park.

The journey also passes through iconic cities like St Cloud and Minneapolis. Passengers can make the most of the view from the train’s observation lounge.