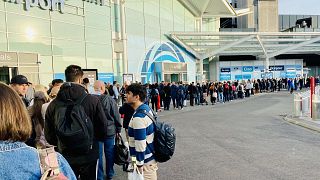 Queues this morning at Birmingham Airport, snaking out of the terminal   -   Copyright  Matthew Broome
By Lorna Parkes  •  Updated: 12/05/2022

Birmingham is the latest UK airport to suffer chaos as European travel picks up, with thousands of passengers caught up in queues today.

Travellers described the situation as “an absolute disgrace” and “very stressful”, with one passenger on Monday calling it “the world’s longest queue”. Lines trailed out of the airport terminal and onto the pavements as early as 6.30am.

One passenger, Matthew Broome, who was flying from Birmingham Airport to Edinburgh this morning, said it took him around two hours to get through the security queue. “Thank goodness I had no bag and checked in online. Flight left about 30-40 mins late,” he said.

Another traveller described it as “the worst ever airport experience”. She added, “Arrived two hours early, flight left an hour late, only got through security when plane should have been departing. Disgrace!”

Although it's not the first time Birmingham Airport has experienced long wait times in recent months, passenger tolerance reached a new low on Monday.

The crisis has been blamed on a double whammy of staff shortages coupled with a dramatic surge in people flying as pandemic-related restrictions have been lifted across Europe.

Manchester Airport queue chaos is back

Similar scenes have unfolded at Manchester Airport again today, despite a statement from the airport on 5 May claiming: “Security waiting times are improving, with 90 per cent of passengers taking less than 30 minutes to get through security checks in the last two weeks.”

But not all passengers are experiencing significant queue times. Morning flights appear to create the largest bottlenecks of passengers at the airport terminals.

How can you make sure you don’t miss your flight?

Both Manchester and Birmingham airports have been advising passengers to arrive three hours before their flight and pay close attention to hand luggage rules that are exacerbating delays at security.

Hand luggage requirements include putting all liquids and gels in a clear plastic bag to go through security, ensuring no liquids exceed 100ml, and placing all electrical devices in separate trays to be scanned.

Travellers reported queues snaking out into the car park at Manchester Airport’s Terminal 1 shortly after 6am on Monday, but by midday passengers were reporting wait times of 35 to 40 minutes.

Manchester Airport has been experiencing problems with queues since mid-March. The airport’s managing director quit at the beginning of April after failing to anticipate the rapid uptick in passenger numbers travelling through the airport.

At the beginning of May, passenger volumes had recovered to 79 per cent of pre-pandemic levels, whereas in January volumes were 40 per cent of what they had been before the pandemic.

Manchester Airport launched a major recruitment drive after thousands of complaints from passengers in March. Some 60 new recruits joined the airport in April and a further 200 are expected to join in May.

Around 500 new recruits are currently going through security training and vetting processes.