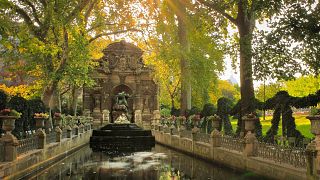 The return of Americans to Europe is one big travel trend this summer, and London, Paris and Dublin are their top destinations, says a new report.

Transatlantic travel from the US is set to soar by 600 per cent compared to last year, as more and more countries relax their COVID rules.

Analysing 40,000 flight routes for trips between two major US holidays - Memorial Day on 30 May and Labour Day on 5 September - travel insurance company Allianz Partners has predicted which European cities are set to get the biggest influx of American tourists.

London comes out on top, with 22 per cent of the share, followed by Paris and Dublin. Slightly harder to guess, in fourth place, is the stunning Icelandic capital of Reykjavik, followed by some warmer climes in Rome, Lisbon and Athens. Americans are also choosing Edinburgh - which is celebrating its 75th festival year this summer - over a US road trip.

There are so many layers of history and culture to all these cities, you could return time and time again and discover a new street, scent or scene. But if the top three capitals of England, Ireland and France are on your list, here are some steers to send you slightly off the beaten track.

And if you’re a European wanting to steer clear of the crowds in your home city, it’s worth noting that Friday 27 May is set to be the busiest day for American travel.

Illumination, dinosaurs and an underrated viewpoint in London

We’re assuming you’ve covered the basics - gazed up at Big Ben, rotated around the London Eye and felt the shiver of history in the Tower of London.

But there are plenty of more niche attractions to explore. Sir John Soane’s Museum in Holborne is one unique spot; the architectural treasure chest of a man who once held a party around his newly acquired sarcophagus. There’s also a folding wall - behind which more paintings lie. The windows and coloured glass panes are so beautifully arranged as to give the whole experience a special aura.

For more fantastic lights, head up to God’s Own Junkyard in Walthamstow, north London. This is where neon and lightbulb signs come for a second life as Insta-backdrops. There’s a little cafe inside, and it can’t fail to lift your mood as you kick back with a coffee and bathe in all the neon.

Far down on the other side of town is Crystal Palace Park, an especially great green area for kids, who will love the dinosaur sculptures. Take their dimensions with a pinch of salt however - real Jurassic lessons are best learnt at the Natural History Museum. Not far from Crystal Palace in southeast London is The Horniman Museum, another family-friendly attraction.

Finding a good viewpoint is an essential part of any city trip.

The problem is, everyone else has the same thought (and the same snaps) and it can be a pricey point on the itinerary too. For better value for money, why not climb the Monument to the Great Fire of London - only £5.80 for a thought-provoking view over the Thames river.

Sewers, jazz bars and a sultry jazz bar in Paris

Let’s get it out the way: the Eiffel Tower is easily one of the most overrated tourist attractions in France. Save your elbows and euros. In fact, if you overlook monumental Paris entirely - including the Arc de Triomphe - you’ll find some fascinating attractions below ground.

You can learn a lot about a city from its sewers, as visitors to the Paris Sewer Museum will discover on a tour through this historical underbelly.

The Catacombs provide a more macabre route through the city’s tunnels, with arrangements of skulls and philosophical musings on the ‘l’empire de la morte.’

Re-surfacing, you can walk up to the Luxembourg Gardens for some fresh air, and admire a bit of miniature boating on the duck pond - a charming activity for children. For a more peaceful spot in this magnificent park, seek out the Medici Fountain in the northern corner, where you can easily while away an afternoon with a good book.

Of course you won’t struggle for places to eat in Paris, but for a lively atmosphere you might not have encountered before, try Le Marché des Enfants Rouge in Marais.

Le Lapin Agile is a sultry jazz bar in Montmartre you won’t find on any of the tourist recommendations. The performances are in cabaret-style, so expect to hear some old French classics like Edith Piaf and Serge Gainsbourg. A show will set you back €35, but a drink is included in the price and - trust us - it’s worth it for that chic, Parisian experience.

In terms of areas, Batignolles in the 17th arrondissement is not a ‘quartier’ many tourists have heard of. Although it’s a little further out, there are some great boulangeries and typical squares around every corner where you’ll see Parisians enjoying their morning café in the sun. Batignolles is also home to a tiny, little vintage shop called ‘Fripery Paris’ on Rue Boursault which has some beautiful items, all handpicked by the owner.

Although a far smaller capital than Paris or London, Dublin still has the full spectrum of touristy spots. The queue for the Book of Kells or an expensive ticket to the Guinness Storehouse might be worth it the first time round, but there are plenty of places to get a deeper sense of the city.

A prison is not the most obvious place to start your holiday, but for a crash course in Irish history - especially the tumultuous 20th century when the country won independence from Britain - few places will get you up to speed like Kilmainham Gaol. You’ll walk in the footsteps of those who led the Easter Rising in 1916 and hear their stories in the chapel where one revolutionary, Joseph Plunkett, married his lover hours before his execution.

Glasnevin Cemetery is another extraordinary place for history lessons, bordered by the splendid National Botanic Gardens; a short journey north but far away enough to lose the crowds.

And while everyone has heard of St. Stephen’s Green, the Iveagh Gardens just behind it is a bit of a hidden gem. Much quieter and perfect of a family picnic or simply a lunchtime stroll - as we found on a recent trip to Dublin.

​​While wandering around the historic Powerscroft Centre in the centre of town, you may come across The Pepper Pot Cafe - a small but thriving business which is a firm favourite among Dubliners. It’s a quirky tea room with a terrace, offering cakes, all-day breakfast, salads and sandwiches. The real showstoppers are their Victoria Sponge Cake, home-made brown soda bread made with treacle - and bagels with Irish smoked salmon.

You can't leave Dublin without visiting Sheridan’s - Ireland’s most famous cheesemonger, recently voted "the best cheese shop in the UK and Ireland". They source the highest quality, artisan cheese from all over the country, from Killeen goats cheese with Fenugreek seeds or a more hard-hitting Crozier Blue, to a traditional Gubbeen cow’s cheese which tastes like it’s come straight from the farm.

Book lovers are well served in Dublin, with many shops to stock up on the classics and thriving contemporary Irish literature. Hodges Figgis was famously put on the map in Joyce’s Ulysses, but Books Upstairs on D’Olier Street is second to none with its selection, knowledgeable staff and serene cafe ambience.