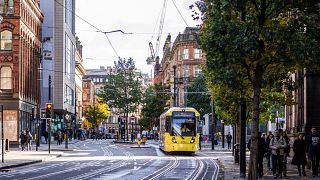 Lifelong Mancunian and Euronews Travel journalist Sarah Palmer shares her opinion on the UK’s new regional lockdowns, as well as walking us through the best spots in her hometown.

As Ian Brown once said, Manchester, the UK’s second city, has got everything except a beach.

Ian Brown has clearly never been to the Costa del Irwell. If anyone can transform a muddy, litter-strewn embankment next to a river which was once so polluted, it went down in history as ‘one of the biggest environmental recovery stories of the last 25 years’ - into a high-demand summer hotspot, it’s the Mancs. Especially this summer, the fourth hottest in British history, when we could only meet up with other humans if fresh air and a six foot distance were involved.

Then, the winter came. The whisperings began in mid-October: second lockdown. European counterparts were already rolling out restrictions. Boris Johnson, however, opted to give the UK a bit more time.

In a north/south divide story akin to the Game of Thrones plotline, Manchester Mayor Andy Burnham - the Eddard Stark equivalent, if you will - rose against the government, calling them out for the mistakes of months past, and imploring them to give Mancunians who had been trapped in tier three for weeks, a fairly simple thing: hope.

A disclaimer, at this point: Manchester isn’t a city that breaks easily. Very much the opposite.

Historically, Manchester was industry. It was horsepower and turning wheels, red brick terraces and factory towers. Today, it is innovation and ever-changing skyline.

It’s a city familiar with change, adapting, celebrating the old and welcoming the new. You’ve never seen love like the outpour after the Manchester Arena terror attack in 2017.

Noel Gallagher really did sum this city up when he said, “the thing about Manchester is… it all comes from here.”

Last week, Boris Johnson announced that the UK was to come out of lockdown, and back into its tiered, regional approach for COVID control. To summarise:

Congratulations Cornwall, we hope it makes you very happy.

Businesses and venues can remain open, no more than six people from different households mixing at a time unless it’s funerals (30) or weddings (15).

Still on a 10pm curfew and distancing in public, but otherwise you’re free to go.

Liverpool has rapidly gone from being THE place for a corona-centric bender, to making the move into tier two!

Which, in brief, means businesses and venues can remain open, up to six people (outside only please), with a 10pm curfew.

Of course, this sudden change could be to do with the fact that Liverpool hosted a mass testing pilot of 300,000 people a couple of weeks ago.

For a city who thinks tables are for dancing on (thanks Mark Radcliffe, promise that’s the last quote drop), tier three doesn’t look good on Manchester.

A crippling result for fellow northerners too, including Lancashire, Northumberland, Newcastle, Durham, Middlesbrough, Darlington, Blackpool, and practically everywhere else between Warwick and Scotland.

Now, we fully understand that the government is acting with everyone’s safety in mind. But it undoubtedly seems a top-heavy result here in the UK.

While some areas of the south - predictable ones though, like Slough - have also crossed into tier three restrictions, there’s only five areas beneath the Midlands which have been identified as high-risk.

Someone grab me a pipe and a deerhunter, because this seems especially interesting when right now, tier two London has an average R rate of 1.0 - 1.1, while Manchester is currently sitting around the 0.7 - 0.9 mark.

As you can probably imagine, Andy Burnham is fuming.

And rightly so, as far as I'm concerned. These measures are going to have lasting, potentially devastating consequences for the people and economy of a city which, for the past decade, has seen nothing but exponential growth.

Not to mention the potential risk Johnson is posing to his own local jurisdiction by keeping the south up and running despite the increasing R rate. In the Labour-led north of England, this latest move from parliament seems to be more politically motivated than just a safety measure.

Anyway, we’re a travel outlet, which means we get the opportunity to tell you why Manchester is a great (the best) city, and share some options for the locals who are sick of their own back yard.

Strap in and bring your tinnies. Here’s our guide to Manchester - the tier three edition.

Since the tier three guidelines state that travel is not *advised*, but not technically *banned*, make the most of the quiet streets to take in corners of the working city that you’ve probably missed when it’s buzzing.

Usually characterised by its bar culture at night and alternative cafes, shops and street art by day, the unusually quiet Northern Quarter invites visitors to see beyond its arts scene reputation.

Tib Street, now a fusion of bars, bakeries, sex shops and tatoo parlours, was named after the River Tib, which it’s built across. (Yes, Manchester locals, there is a river in the Northern Quarter that is not the Irwell, the Irk or the Medlock). The River Tib has run beneath the city since it was totally culverted in the 1820s.

Take the opportunity to Google search every bar and pub, every street name, in this part of town. More often than not, there’s a story to tell.

Geographically, the Northern Quarter is just across the road from the more recently developed Ancoats.

This gem is getting quite a reputation for its eclectic food and drink scene, and major investment into the area has seen a whole new flock of residents incoming to this quieter part of town.

Once a gritty textile district, Ancoats still has quite a charming ‘in progress’ feel. Cutting Room Square is a highlight, arguably the most European-feeling part of the city. At least, when the sun’s out and the bars are open.

But one of the best things about Ancoats is it gets you right onto the canals. In Manchester, once you get onto the canals, you have the whole city within walking distance.

Manchester is a network of narrow, brickwork waterways. In its heyday, the Manchester Ship Canal was the largest in the world, linking Manchester to the Irish Sea - 58km in total.

In Ancoats, the canal in question is the Rochdale Canal. Follow it down to inner-city Piccadilly Basin, or out towards Cheetham Hill and the suburbs.

All this canal chat segways us nicely, across the city, to the understated Castlefield.

Lying on the border between Manchester and Salford, Castlefield is often outshone by neighbouring Deansgate and Spinningfields, where domineering food and drink industry leaders like The Ivy, The Hilton, 20 Stories, The Alchemist (the list goes on...) reside.

Castlefield is actually one of the largest conservation areas in Manchester. According to historians, the area provides the first record of human settlement in the city, when Roman soldiers built a fort called Mamucium atop a rocky terrain which was protected by the Irwell and the Medlock.

There’s no better time to check it out than right now, when the only crowds you’ll need to battle with are the geese - without a doubt the worst part of this corner of Manchester.

There are lots of blue plaques scattered about this area too, for the heritage geeks.

Where can you still get food?

As the pandemic continues to drive businesses into the ground, it’s so important to support your local wherever possible. Here are some of our favourites, but it's really just a taster menu from the vast array of eateries scattered through town. In chronological order, because in the north, it’s breakfast, dinner, tea:

Two options, Deansgate or the edge of the Northern Quarter by Shudehill. Really lovely coffee, and vast brunch selection with an Australian twist.

They do breakfast, but more importantly they do cake. Now available on Deliveroo.

Lunch (dinner for the locals)

Located on Moseley Street, and with another restaurant in Chorlton (south Manchester) Brewski is famous for its poutine but can we recommend the burrito? Available for delivery and take away currently.

Rudy’s Neapolitan Pizza has genuinely pioneered the coronavirus-induced plan Bs. Not only have they been fully operational for takeout and delivery, but their Bake At Home pizza means you can stock up and cook them from fresh any time. It also happens to be some of the best pizza in Manchester, undisputed.

This restaurant caused quite a stir when it first opened in Manchester, as the first English branch of the Glaswegian restaurant. There’s now a Six by Nico in Liverpool and London too, but the Manc one is still clearly best.

Although they are closed for the moment, you can still order a ‘Home by Nico’ box. If you’re in the mood for fine dining, this four-course restaurant experience is for you.

It’s not in the city centre, but according to my fellow Manchester-based Euronews colleague, it’s well worth travelling for.

Lurking on the ever-improving high street in Eccles, Mrs A’s is the best Bengali street food you will ever try in the UK. Delivery is available within a two-mile radius, or you can collect from Eccles.

For just £30 you can pick up a three-tiered (how appropriate) metal tiffin box for two, with a selection of curries, small bites, breads, and kebabs. If you pay an extra £20, you can keep the tins.

Beyond the city limits

One of the very best things about Manchester is how well-connected the city is.

When life is normal, this means a two hour train to London, and likewise to Edinburgh. Liverpool, as well as Lytham and Formby beaches, are just a short drive down the M62.

For those who love the hills, Manchester’s links to the great outdoors is most apparent from high ground. In an almost crater-like way, when you’re looking out over Manchester from above, you can see the hills rising around the city.

To the south east, towards Sheffield, there’s the Peak District. To the north, the Pennines. On a clear day, you can see Blackpool and the power plants in Runcorn.

Manchester is literally an hour’s drive from Wales, 90 minutes from the Lake District, and two hours from Scotland. Not that we can visit any of these places right now. More of an FYI for if/when we level up to tier two.

What we’re essentially saying is, there’s no better place to be living under tier three restrictions than the north of England. We've got everything we need right here. Up the north, and stay strong Manchester.