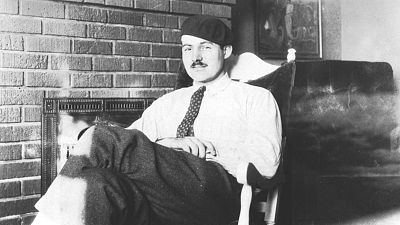 “If you are lucky enough to have lived in Paris as a young man, then wherever you go for the rest of your life, it stays with you, for Paris is a moveable feast,” so goes Ernest Hemingway’s famous quote about his time in the French capital during the 1920s.

A hedonistic haven for artists, raconteurs and misfits, Hemingway’s Paris was a smoky liberal playground for the young and the gifted still recovering from the devastation of the First World War. He covered his favourite parts of the city in great detail in 1960’s deeply personal memoir, A Moveable Feast, and thankfully many of those places still exist today.

On the 60th anniversary of Hemingway’s death, here’s a look at some of his favourite Parisian haunts.

A stone’s throw from Hemingway’s first apartment on Rue du Cardinal Lemoine, Place de la Contrescarpe is a lively little square with a neighbourhood feel that’s a pleasant detour from the tourist trail. With a small fountain at its heart and flanked by friendly terraces and bistros, it’s a cool spot to watch the world go by.

Unfortunately no longer with us, Place de la Contrescarpe was also home to the rowdy Café des Amateurs during Hemingway’s time. He clearly wasn’t a fan though, as his less-than-flattering description in A Moveable Feast testifies – “It was a sad, evilly run café where the drunkards of the quarter crowded together and I kept away from it because of the smell of dirty bodies and the sour smell of drunkenness.”

Though 100 years have passed since Hemingway lived there, the Jardin du Luxembourg is still a lush bucolic corner of Paris where one can escape the hum of the streets. Lined by landscaped trees and hedges and filled with elegant ponds and statues, the gardens were a fond place for the writer and his family to visit when looking to spend time away from their cramped apartment for a few hours.

Amusingly, the gardens were also a place for Hemingway to escape the sweet temptations in the windows of Paris’s myriad bakeries – “the best place to go was the Luxembourg gardens where you saw and smelled nothing to eat all the way from the Place de l’Observatoire to the rue de Vaugirard.”

One of Hemingway’s favourite cafes and where he wrote most of The Sun Also Rises, La Closerie des Lilas is still standing today on the Boulevard du Montparnasse. Though he loved Paris’s sociable café life (which he and many other American expatriates felt was a world away from their puritanical prohibition-crazed homeland), for Hemingway the Lilas was a simply great spot to write and a place where none of the fashionable types would visit.

“It was warm inside in the winter and in the spring and fall it was very fine outside with the tables under the shade of the trees,” he wrote. It was also the first place where Hemingway read F. Scott Fitzgerald's original manuscript of The Great Gatsby.

For Hemingway enthusiasts eager to visit, there’s a seat at the elegant mahogany bar inside with the writer’s name etched in brass on the top (we can’t confirm if he ever actually sat there but it looks cool).

“That wonderful narrow crowded market street,” was how Hemingway described the rue Mouffetard and it’s just as lively today. Though in the 1920s it would have been a chaotic working market, these days it’s quite a touristy affair and yet there’s still a certain charm.

With stalls and terraces spilling over from either side, it’s a colourful smorgasbord of fresh fruit, sticky patisseries and gooey cheese that’s well worth a serendipitous stroll. If it’s particularly busy, escape the crowds and head north across Place de la Contrescarpe to check out Hemingway’s first apartment at 74 Rue du Cardinal Lemoine.

While these days it’s a somewhat touristy and ostentatious (though still charming) spot across the river from Notre Dame Cathedral, the original rickety old Shakespeare and Co was located on the quiet rue de l‘Odéon, just north of the Luxembourg gardens. The English-speaking bookstore was a refuge for Hemingway and many of his other expatriate writer friends including James Joyce and Gertrude Stein.

“On a cold windswept street, this was a warm, cheerful place with a big stove in winter, tables and shelves of books, new books in the window, and photographs on the wall of famous writers both dead and living,” he wrote in A Moveable Feast.

Another survivor of Paris’s roaring café culture of the 1920s, Les Deux Magots on Boulevard Saint-Germain is where Hemingway would often meet his friends for drinks. French literary heavyweights including Jean-Paul Satre and Simone de Beauvoir also spent many hours underneath its famous awnings.

While the writers of Hemingway’s day would baulk at today’s extortionate prices, its sublime Art Deco interior and artistic legacy still makes the brasserie a fine place for a coffee or a cocktail (probably just one). One fleeting vignette from A Moveable Feast gives an amusing window into the drinking habits of Irish writer James Joyce – “He asked me to have a drink with him and we went to the Deux-Magots and ordered dry sherry although you will always read that he only drank Swiss white wine.”

The banks of the Seine

From the fishermen who fascinated him to the secondhand bookstalls (bouquinistes) dotted along its banks, Hemingway loved a stroll along the Seine. Though the fishermen have long since left Paris, it’s still easy to see why he loved the iconic river so much.

Painting an evocative picture, Hemingway wrote “with the fishermen and the life on the river, the beautiful barges with their own life on board, the tugs with their smoke-stacks that folded back to pass under the bridges, pulling a tow of barges, the great elms on the stone banks of the river, the plane trees and in some places the poplars, I could never be lonely along the river.”