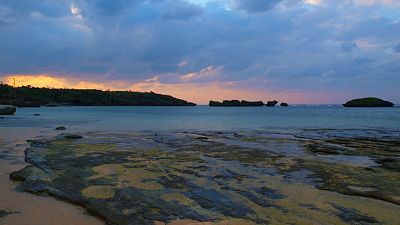 The remote Japanese island of Iriomote has been added to the UNESCO World Heritage List.

Iriomote is part of the Okinawa prefecture in the East China Sea, and is made up of 160 subtropical islands - many of them covered in dense jungle. Only 49 of these islands are inhabited by humans, making the archipelago the perfect destination for travellers looking to get off the beaten track in 2022.

Iriomote is 40 minutes by boat from Ishigaki Island - the commercial heart of the archipelago - and is inhabited by just over 2,000 people.

A nature lover’s paradise, over 90 per cent is covered in tropical forest, including the largest mangrove jungle in Japan.

With so much nature on offer, we’ve rounded up the best places to visit in this Japanese wilderness.

What are the travel restrictions for Japan?

All tourism is suspended in Japan and currently only business travellers and students from a limited number of countries are able to visit Japan. European and UK travellers are currently barred from Japan and cannot enter.

There are hopes that Japan will reopen to tourists in early 2022, you can find further information and updates here.

What can I do on Iriomote Island?

There are some great hiking trails on Iriomote, many of which take you through rare and unique ecosystems. You can follow trails into the depths of the forest and find hidden waterfalls, or if you prefer exploring my boat, you can weave along the coastline in a kayak or canoe and visit the rich mangrove jungles.

If you’re planning on hiking in Iriomote, it’s advisable to come prepared. The island’s subtropical climate and rainforest ecosystem mean it rains often, so make sure to pack those waterproofs.

What animals can I see on Iriomote Island?

Iriomote is home to some rare and endangered animals. These include the Iriomote wild cat, which was first discovered in 1965 and is only found on this island - it’s nocturnal though, so the chances of spotting it are quite slim. You might have more luck with Kishinoue’s Giant Skink - a species of lizard named after a Japanese biologist - which can only be found in the archipelago and Miyako region of Japan.

And from April to June, if you visit the island after dark, you’ll be able to witness the Yaeyama Hime fireflies, which light up the night sky and mingle with the stars above.

One of the best ways to explore Iriomote is by boat.

The Urauchi River Jungle Cruise will take you down the longest river in the archipelago and through the surrounding mangrove forest.

From the drop-off point, you can hike up to the Mariudo Waterfall viewing platform and see one of the most stunning waterfalls in the region.

What beaches can I visit on Iriomote?

The Iriomote coastline is peppered with sandy beaches, with Hoshinozuna Beach its most renowned.

Hoshinozuna means ‘star shaped sand’ and the name refers to the tiny star-shaped fossils that cover the beach, the remains of single-celled organisms that lived on the seafloor millions of years ago.

If you’re looking for paradise though, look no further than Funauki Beach.

The village of Funaki is home to just 50 residents and, with no main roads in or out, it is truly isolated. The beach can only be accessed by boat from Shirahama Port, with ferries running a few times a day.

The crystal clear waters and golden sands mean a trip here is well worth the effort, just make sure you don’t miss the boat back.

World's first net-zero transatlantic flight could be just months away