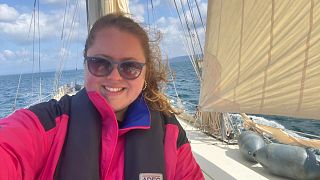 Despite living in the UK my entire life, like many people who grew up within the confines of London, I have seen relatively little of my home country.

I didn’t step foot in Scotland until I was 20, never experienced the majesty of the Lake District until years later, and hadn’t even been to Birmingham until this year.

There’s something peculiarly British about our reluctance to explore within our own borders. Pollsters YouGov found a few years ago that the average Brit is more likely to have been to Paris than Edinburgh, Amsterdam than Nottingham, and almost twice as likely to have flown to New York than ventured to Belfast.

But between the pandemic limiting international travel and the climate crisis lessening my own desire to jet off to far-flung locations, like a lot of people, I’ve found myself longing to travel domestically more than ever before.

Which is why when I was offered the chance to travel from Inverness to Belfast by boat, I jumped at the offer. A once-in-a-lifetime opportunity to sail down Loch Ness, through the Inner Hebrides and dock in Belfast’s Titanic Quarter? Count me in.

I embarked on an 11-day trip on a Thames barge

The trip was on the beautiful Snark, a newly constructed, steel-hulled, sailing barge - often known as a Thames barge. Being my first time on a boat like this, I wasn’t sure what to expect - and to be honest, I’m not entirely sure that the Snark is remotely representative of similar vessels.

Run by Paul and Qiao, the skipper and first mate (and also husband and wife), the boat serves as the pair’s home during the winter months, before being used to take guests on sailing holidays when the weather warms up.

Paul, a former international sailor on racing yachts, and Qiao are both architects by training - which means the living quarters on board are, perhaps unsurprisingly, beautifully crafted.

From the well-equipped kitchen to the ingenious layouts of the guest cabins, every detail on the Snark is meticulously thought-through, making for an exceptionally liveable space.

Which was good news, as it would be my home for 11 days.

I was one of four guests, a diverse group in terms of background, age and outlook. This seems to be fairly typical of Snark’s clientele, drawing some people with a particular interest in sailing, others with a deep passion for the environment, and some who simply want to try something new.

This combination of personalities, along with Paul and Qiao’s fascinating backgrounds, made for lively and memorable dinner-table conversations.

All the food is prepared by Paul - a wonderful cook - with a very varied menu (despite his claims to the contrary early on). And there are plenty of excellent drinks options too, all included in the price.

Sailing is more about the journey than the destination

We began our trip in Inverness, where we would be travelling down the Caledonian Canal, through 29 locks, four lochs (yes they’re different), before eventually finishing the Scottish leg of our journey at Corpach on the west coast.

Due to lock keeper shortages and the threat of gale-force winds, we had to make a few adjustments to our itinerary - but the joy of a trip like this is the flexibility. Being at the behest of mother nature means things always have to be kept relatively loose.

As a chronic over-planner and self-confessed control freak, there was something unbelievably freeing about knowing that as long as I got to Belfast in time for my flight home - I had no obligation to be anywhere or do anything for the next 10 days. It was a pretty unfamiliar feeling, I’ll confess.

While I’m well-travelled internationally (less so domestically, as previously noted), it’s rare for me to take a trip that’s more focused on journey than destination. This took some getting used to, as most of the time our daily plan was simply ‘get to this mooring point’ or ‘move further down this loch’ - without a tight schedule.

Instead of researching things to see in upcoming towns or looking for swimming spots along our way, I filled my time lying on the deck reading, basking in the glorious sunshine as we cruised down Loch Ness, taking in the scenery of the stunning Scottish Highlands, and doing a little yoga (in addition to her multitude of other talents, Qiao is also a yoga instructor with mats, books and blocks aplenty).

For the first half of the trip, we were mooring on pontoons by locks, which meant ample opportunity to explore the areas we passed through. Fort Augustus was particularly beautiful, while the art house cinema in Fort William was my favourite little find. This also gave me plenty of time to run along the towpaths, use the impressive network of electric bikes in the area, and even treat myself to an exceptionally cold spot of wild swimming.

By the time we reached Neptune’s Staircase - an imposing series of eight locks that can take hours to move through, near the end of the Caledonian Canal - the weather had turned somewhat, and Ben Nevis was obscured by imposing clouds. Personally, I enjoyed the moodiness this created, as I’m a strong believer that Scottish landscapes look even better with ‘atmospheric’ lighting.

Finally, several days after leaving Inverness, we passed through Corpach Sea Lock - our final lock of the journey - and we were out through Loch Linnhe, and then, for the first time, at sea…which is where I learned I suffer from intense seasickness.

Reader, it feels important to let you know that I have spent more than 20 years of my life in and around water. I’m only 28, so proportionally that’s a large chunk of my existence.

I was a competitive swimmer, before later competing for Great Britain in kayaking and triathlon. Water is my happy place; I’ve spent a lot of my life both in it and on it. I say this because this next section will make you wonder why on earth I ever signed up for this trip.

As soon as we moved out to sea, I felt a wooziness I hadn’t experienced on the canals and lochs. Perhaps arrogantly, I’d believed myself immune to seasickness - which potentially made the experience all the more intense.

Despite wearing anti-seasickness bands, taking all the anti-nausea tablets I could safely consume, and chomping my way through more ginger biscuits than is likely healthy, nothing seemed to work.

Most irritatingly of all, everyone else seemed remarkably fine - while I, on one night in particular while we were anchored somewhere off the coast of the Slate Islands, was struggling to sleep without getting up to vomit every 20 minutes. At this point, my avid reading (I finished four books in the first three days of the trip) had to cease, as it was certainly making things worse.

What did help, however, was sitting on deck obsessively looking for sealife (dolphins or porpoises, I wasn’t picky). The Inner Hebrides are a nature-lover’s dream, with plenty of flora and fauna to fixate on. I didn’t see as many dolphins as I would have perhaps liked, but there’s still no greater thrill than spotting a dorsal fin in the waters around you.

It was navigating these bays and inlets when I realised, for the first time on the trip, I was seeing a part of the UK - my home country - that I could never have seen were it not for the Snark.

Sure, it’s possible to holiday on the Isle of Mull or stay for a few nights in Oban - but you can’t see seals snoozing under Fladda Lighthouse or the sun setting behind the ruins of a long-forgotten castle at the tip of the Isle of Kerrera, unless you’re on a boat. There are things you can truly only experience from the water.

My queasiness during this section was certainly offset by the privilege of being able to see sights that even locals may never get to enjoy.

Sailing offers slow travel and introspection with a sense of adventure

After a few days exclusively at-sea, we stopped on the beautiful island of Islay, home to the Lagavulin whisky distillery - not my drink of choice, but I’m a big ‘Parks and Rec’ fan and I couldn’t resist paying homage to my favourite Ron Swanson scene.

After that, I spent the day hiking, exploring the beautiful island and trying to recover my sense of balance.

Once back on the boat, next in store was a rather rough - or “rolly” as Paul more euphemistically likes to refer to waves that seem frankly enormous to me - crossing through the Irish Sea, and suddenly we were within touching distance of the Northern Irish coast.

Having never been to Northern Ireland (or watched ‘Game of Thrones’), I had little-to-no expectations. I knew I’d probably enjoy Belfast as a city, but wasn’t prepared for how beautiful the coastline is. We anchored off the coast of Cushendun, and I was constantly making mental notes of places I had to come back and explore properly.

The next day we made our way into Belfast. After such a remote 10 days, it was jarring going past huge cruise liners and the iconic Samson and Goliath cranes.

While I know lots of people categorise themselves as “definitely a city person” or “resolutely rural”, I am absolutely split down the middle. So as we pulled into Belfast Harbour Marina, I was delighted - but not relieved - to be in a city.

After one night in Belfast - including a slightly ill-timed and naively planned evening run to look at the murals by myself - our trip was over. I could write an entire article about my 24 hours in Belfast, but I will spare you from that here. I will say that Beflast is an absolute treasure trove, and I’m well aware that I only scratched the surface of what’s on offer in this beautiful, vibrant and fragile city.

Unlike any holiday I’ve been on before, my time on the Snark didn’t zip by in a flash. That sounds like a backhanded compliment, but it isn’t meant negatively.

I think instead, it’s a reflection of what happens when you focus on the journey rather than the destination. There was no rigid itinerary with things to tick off each day, but a slower style of travel that we’re simply not used to these days.

Next year Paul and Qiao will be taking guests on board the Snark on a Baltic voyage, via Boulogne, Amsterdam and Copenhagen. If you’ve found yourself longing for a more introspective type of holiday experience - albeit still with a spirit of adventure - you may want to join them.

Watch the video above to see more of life aboard the Snark.