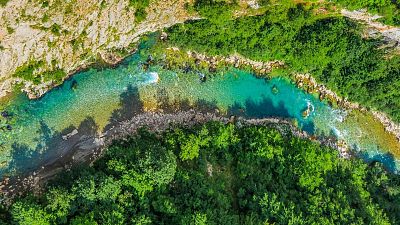 Our theme for the current EU Green Week is 'Protect our Oceans.' But it's really all bodies of water that we should be looking after. Not just because our lives literally depend on them, as part of one big ecosystem. But because so many holidays, experiences and tourism hotspots are based around water. Where would we be without the thousands of beaches local and tourists visit all over the World, every year?

Despite all this, water has never been so under threat. Water shortages are affecting more than three billion people (almost half of the world’s population), with the amount of freshwater available per person having plunged by a fifth in the last two decades.

Water is essential for not just human, but also animal and plant life. To celebrate World Water Day, we’ve compiled a list of the 10 best natural water spots in Europe.

The Secret Lagoon was first used as a water source in 1891 and is the oldest lagoon in Iceland. All the sulphur-rich thermal water is provided by a nearby geyser which spurts every few minutes.

Cutting through Montenegro and Bosnia and Herzegovina, the Tara River cuts through mountains and the Tara River Canyon, a UNESCO World Heritage Site and the deepest canyon in Europe. The river is home to an abundance of wildlife and is popular with white water rafters.

Found in the Julian Alps, Lake Bled is of glacial origin and is a favourite with honeymooners drawn by the romantic setting.

The reason that Evian water is globally famous is the Cachat spring – formerly known as the Saint Catherine Fountain – which runs all year round. It is said to have cured the kidney stones of Count Jean-Charles de Liazer, an aristocrat fleeing the French Revolution.

A special protection area for birds, the Bornos Reservoir is also well known for the yearly Lake Festival. This natural pool in Andalucia has clear waters that are perfect for swimming and fishing.

The Valsan River in Romania is home to a ‘living fossil’. The asprete is a fish that has been around for millions of years and can only be found on a 1 kilometre stretch of this river, as hydroelectric dams and other environmental impacts have eradicated it from elsewhere.

At 705 metres high, Mardalsfossen is one of the highest waterfalls in Europe and could power the whole of Norway. Surrounded by stunning scenery, the two-tiered waterfall cascades into a hanging lake.

In the foothills of the Alps, Lake Como is an ideal holiday destination and hosts many resorts. The third biggest of Italy's great lakes, Como is a staggering 425 metres deep, making it one of the deepest lakes in Europe.

One of the top salmon-catching spots in Ireland, the Caragh River flows through Country Kerry in Ireland’s south west. The river falls under the category of a Special Area of Conservation along with nearby Killarney National Park - and is home to the rare Kerry Slug.

The Danube Delta is 580,000 hectares in size and harbours the largest amount of fish species in Europe. The area is one of the best protected waterways in Europe and stretches across Romania and Ukraine.

Have we missed out any of your favourite lakes, rivers or maybe even a small stream? Let us know over on Instagram.