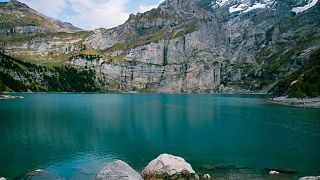 People who believe water is ‘tasteless’: this nonsensical understanding of an element that makes up 71 per cent of our planet and 60 per cent of our own bodies is wrong.

Firstly, let’s take a look at the science behind our water sources. Planet Earth is a complex composite of minerals (among other things but we don’t want to dig too deep into the chemistry and physics here). In simple terms that means that as water travels from source to tap, it picks up some of these elements and acquires the flavours of its journey.

The next level is treatment. It eliminates the bad stuff but can also impact the taste. This might be through chlorination, distillation or ionization - there’s a lot of purification going on.

If water was tasteless, there would likely be no industry and no competition for consumer hydration. Brands such as Evian, Avant and San Pellegrino are marketed for their flavour after all. Without this taste variation, any bottled water purchase would be a clear plastic, plain label affair. Ecosystems that rely on branding for survival - like the Kardashians and post-war artwork from Warhol and beyond - would be totally eradicated. There is a reason water sommeliers exist.

For the majority of Europe, water is an accessible part of the day-to-day. So, where can the creme de la creme of water be found? Allow us to start the debate.

Where is the best tasting water in Europe?

The clue is probably in the name. For a landmass that is six per cent covered in fresh water and glaciers (that’s around 2,750 km²) and home to 10,000 waterfalls, locals and visitors alike report Icelandic water is the ultimate hydration experience.

Indeed, 95 per cent of Icelandic tap water comes from fresh springs, and it’s totally void of the calcium, chlorine and nitrate which is common in neighbouring countries.

Norway, with its majestic fjords, is another winner when it comes to drinking water quality. This is through a combination of freshwater potential and hydropower expertise. In some parts of the country, the water piped into homes is completely untreated with drinkers relying on the natural filtration of ice and rocks.

Some Norse legends even say that if you drink water directly from a glacier, you might live to be 100.

This might come as a surprise following two arguably more predictable locations, but the UK has one of the purest quality tap waters in the world. This is especially true in more mountainous regions like Scotland and Wales.

In built-up cities like London, the water quality takes a bit of a hit based on infrastructure. Water networks have been buried underground as cities have been built skywards. Any modern optimisation is a big task, as it usually involves delving through a complex maze that begins with the road surface and ends several metres below.

Austria ranks highly on the best water list because of its proximity to the Alps. In Vienna, the mountain range is the city’s most direct source, and there’s minimal interference when it comes to purification.

Austrian cities are dotted with water fountains for public use, which were always popular with visitors - past tense, because there’s been a pandemic since the country was last open to tourists.

Meanwhile in Sweden, the country’s progressive concern for the environment means bottled water is largely avoided. Being one of the less polluted countries in the world, there are even fresh wells in the Swedish countryside where people collect their drinking water.

Tap water in Switzerland predominantly comes from lakes and springs thanks to its alpine mountainous landscape. Being a relatively wealthy country, the procedures followed to ensure tap water is of top quality are some of the most thorough.

Rate your local water for us on Twitter @euronewstravel.