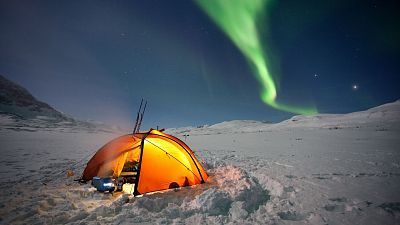 Lapland is the real life winter wonderland, blessed with snow six months a year. It might be best known as the home of Santa Claus, but this subarctic region has much more to offer, even virtually.

Here’s our alternative guide to Lapland, which doesn’t revolve around the white-bearded man.

Is Lapland a country?

No, Lapland is a region that spans three countries: Finland, Sweden and Norway. It boasts beautiful wilderness, ski resorts and natural phenomena like the midnight sun and the Northern Lights.

When is the best time to visit Lapland?

Firstly, with travel restrictions in place in many places you might be looking for a way to enjoy Lapland remotely. FinnAir have created a virtual reality flight experience. You can choose from eight special trips available from Christmas Day. Granted, Santa is still part of this trip, but it’s a unique experience right? And with travel restrictions still tight across many European nations, it might be as close as you can get to Lapland for the time being.

If you’re planning to go in-person, there’s no bad time to visit Lapland. It really depends on what you’re looking to get out of your trip. January and February are the best months for skiing and March has the optimum conditions for spotting the northern lights.

The snow melts between April and August if you’re after some warmer weather for hiking. And from November onwards, the heavy blanket of snow returns.

If you’re looking to learn more about the people who originate in Lapland, pay a visit to the Sámi people in the Norwegian town of Tromsø.

This Indigenous population were the first settlers in the European Arctic. Learn about their life and culture, which they have cherished for thousands of years, and taste some traditional Sámi food.

Their friendly reindeer will even take you for a sleigh ride.

If you want to embrace your inner Elsa, then a visit to the snow castle in Kemi has to be on your to-do list.

It’s possible to take a short trip to the Swedish border here and, of course, take a photo of you standing in two countries at once.

National parks and caves in Lapland

Hop over the border to Björkliden in Sweden where it’s possible to take a winter hike in Abisko National Park or explore the Kåppas caves - Sweden’s longest cave system.

Famed for its skiing and Northern Lights, Bjorkliden has plenty for outdoor adventurers all year round.

You could also try your hand at the art of ice fishing.

A post shared by PANGEA The Travel Store (@pangeaes)

If you can look past the freezing temperatures of the water, swimming alongside wild Orca has got to be one of the highlights of a visit to Lapland.

There are a range of guided tours you can choose from around the Skjervøy area in Norway.

Sleeping under the Northern Lights

No trip to Lapland is complete without a sighting of the magnificent Aurora Borealis - aka - the northern lights.

There are lots of guided tours to choose from across the region. , For a prime viewing spot, book yourself a night in a luxury viewing pod, like these ones at the Arctic Treehouse Hotel in Rovaniemi, Finland, or the luxury glamping pods in Torassieppi.

They’re specially positioned to get panoramic views of this glorious display of nature. Surely the ultimate sleeping under the stars experience.

What will give you the best chances of seeing the Northern Lights?

We’re glad you asked. It’s a combination of clear skies and a bit of luck, but there are a few things you can do to increase your chances.

Aim to visit between August and April - this is when the nights are darkest, so it will be easier to spot them.

Your chances will also be greater the further north you go.

What do they eat in Lapland?

The Lappish diet is considered one of the world’s healthiest. It consists of lean game meat such as reindeer (maybe don’t tell your kids), fresh fish, berries from local forests and bogs, as well as some hearty fondue specialities.

Whilst visiting the region, you must try cloudberries - a highly sought after wild berry which is rich in vitamin C.

If you visit Rovaniemi in Finland during the spring, you’ll be there for the annual ‘Reindeer Chef of the Year’ (“Vuoden Porokokki”) competition, which is a cook off between some of Finland's most renowned chefs.

Local specialties to try in Rovaniemi are a sweet dessert called ‘leipäjuusto’ meaning ‘bread cheese’, and ‘rieska’, a type of barley flatbread which is usually enjoyed smothered in butter.

One of the delicacies in Swedish Lapland is ‘coffee cheese’, typically made from reindeer or goat milk. It may sound bizarre but it doesn’t flavour the coffee, it just adds a creamy texture.

Coffee is boiled over a traditional open fire before being served up in birch wood cups called ‘kosa’. The coffee cheese is then sprinkled over in cubes.

If you’re on the hunt for something stronger, try terva snapsi, a Finnish spirit made out of pine tar with a smoky taste. The Finns swear by it for warming the cockles after a day on the slopes. But it’s also used to waterproof boats so you have been warned!

Find your zen in Halipuu Forest

If you’ve overdone it a bit on the terva snapsi, head to Halipuu Forest for rest and relaxation and to meet a man who goes by the name of the ‘Campfire Barista’. He will brew you a coffee over - you guessed it - a campfire as you soak up the ambience of this beautiful place.

It will be a coffee break like no other as you sip to the sound of a crackling fire beneath the tranquil white canopy. You could also try some ‘Arctic cocooning’ - a wellness experience which involves lying in a hammock and swaying gently among the trees.

Tree hugging is almost an unwritten rule here. After all, it is named the ‘hugging forest’. At a time like this when we can’t hug each other, at least you can get some endorphins with some tree love. There’s even a world championship for it.

And get this - you can even take a live virtual tour of Halipuu Woods from the comfort of your sofa. A local tour guide will join you on Zoom and tell you how the Lappish have been using the forests for wellness for centuries - before it became fashionable.

Have you ever been to Lapland? What was your favourite activity? Tag us on Twitter @euronewstravel.