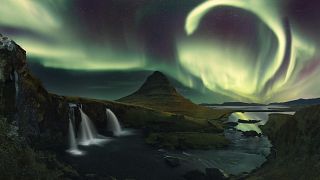 The best time to see this incredible natural phenomenon is during the spring and autumn equinoxes.

But if you can't make it to somewhere where you can see the Northern Lights in person, then these photos could be the next best thing.

Travel photography blog Capture the Atlas has just released the fifth edition of its annual Northern Lights Photographer of the Year.

This year's entries include photos taken around the world from Canada to Denmark, Iceland and New Zealand.

The images were taken by 25 different photographers of 13 different nationalities.

So in the midst of the season, here are some of the best shots of the Northern Lights this year.

This photo from Marybeth Kiczenski was taken at Point Betise Lighthouse in Frankfort, Michigan, US.

"I was greeted with quite heavy winds but a beautiful sunset and warm weather," the photographer says.

"It was super busy since it was Friday, and there were good conditions for Auroras. It was fun to make some new friends, and we chatted while waiting for Lady Aurora to make an appearance."

"As a kid growing up, chasing the Northern Lights had always been a mystical dream," says photographer David Erichsen. This stunning photo was taken at Castner Glacier in Alaska, US after he hiked for two hours at midnight to reach his destination.

"As I made my way out of the cave, my walk quickly became a full-on run as I saw the sky split open with magnificent colour.

"Sadly, the ice cave collapsed on itself a couple of months ago, which just shows that you have to chase every opportunity before it is gone."

Mattia Frenguelli says this day in Kirkjufell, Iceland will be etched into his memory forever.

"It's difficult to explain with words since to fully understand it you had to be there. To take this photo, I had to stay focused while contemplating this immense spectacle of nature, trying to stay as calm as possible despite my strong emotions."

Frenguelli explains that this was one of the most prominent displays of Northern Lights in recent years with the solar flares causing blackouts across India.

Ruslan Merzlyakov captured this beautiful image of the night sky just a three-minute drive from his home in Nykøbing Mors, Denmark.

"Many think that Denmark, being placed far away from the general Northern Lights activity, is not an ideal place to see the Aurora," Merzlyakov says.

"This might be true, but there is always hope for magic during the darkest months of the year."

"We've all heard stories about the land of the Midnight Sun," says photographer Rachel Jones Ross.

"In the summer, the sun doesn't really set, and in winter, nights are long with no sun or very little sun at all."

But there are also 3-4 days each month when the moon doesn't set and 3-4 days when it doesn't rise, she explains.

This image was captured in the Tombstone Mountain Range, Yukon Territory, Canada on one of the rare few days when the moon also doesn't make it above the horizon.

Nugget Point Lighthouse is located on the eastern side of New Zealand's South Island. It rests atop the famous rocks, named by Captain Cook because they looked like chunks of gold.

Here you can get a panoramic view of the southern seas - a photographer's dream.

"I arrived here early one autumn morning to capture the Milky Way rising above the lighthouse. It was an image that I’ve planned to capture for a long time," says Douglas Thorne who captured this photo.

"However, I was greeted by a surprise visitor. The Aurora Australis began to glow, its beams blooming over the ocean."

The Milky Way and Aurora began to synchronise resulting in this incredible photograph.

"Seeing the Northern Lights dance above one of the most beautiful mountains in Iceland is a difficult experience to put into words," says photographer Pierpaolo Salvatore who captured this image.

"Imagine the wind in your face, the smell of the sea, and the sound of the waves on the rocks while the Queen of the North dances in the sky."

Salvatore says that he loves nature in all of its forms - precisely because it offers moments like this.

Escape to Italy: We set up a remote work village on a Tuscan mountain