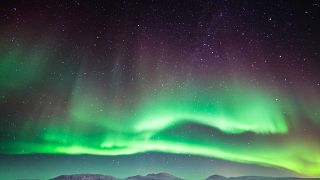 The Aurora borealis – commonly known as the Northern Lights – is something everyone must see at least once in their life, perhaps twice, or even three times, if they are lucky.

However, amid growing awareness of the devastating environmental impact of flying, people are increasingly looking to greener, more sustainable forms of tourism.

Luckily, seeing the Northern Lights can be one of those conscious travel opportunities. Several destinations around Europe where the ethereal light display can be viewed are reachable by train.

As the name suggests, the dancing waves of the Northern Lights are only visible in countries near the poles of the earth. This makes Norway Europe’s Holy Grail for light-watching

The natural phenomenon is best seen from early September to mid-March when the days are shorter and the nights longer and darker.

Starting in the Norwegian capital Oslo, it is possible to travel via sleeper train to Trondheim and then onto Bodø a day later.

The railway line happens to be one of Norway’s most picturesque as it passes through charming villages, beautiful rock formations, glaciers, valleys and fjords along the Norwegian coast.

Nicknamed the "trail of trolls", the first leg of the journey is a 553km stretch from Oslo to Trondheim, Norway’s third largest city and one of the oldest.

Tour the sites here for a day – the colourful old houses of Bakklandet and Nidaros Cathedral are particular highlights – then catch another overnight train to Bodø and get Aurora Borealis hunting.

For the ultimate environmental transport: Sweden

Sweden is another great destination to see the Northern Lights.

In fact, the Aurora Sky Station in Abisko is one of the best places in the world to see the Northern Lights as it is directly underneath the aurora oval, a magnetic ring around the earth where the spectacle is most visible.

Guests who stay there have a 100 per cent success rate when it comes to seeing the lights after three nights or more, according to Peter Rosén, who runs Lappland Media.

This small village in northern Sweden can be reached by catching the train from Stockholm to Kiruna. From here it is a one-hour train ride to Abisko.

Plus it is probably the most northern place you will ever visit - unless you are a polar explorer.

In Swedish Lapland, environmentally-friendly transport can be taken to the next level.

After reaching Luleå via an electric Arctic Circle train from Stockholm, the Northern Lights can be seen on a dog sleigh from JokkMokk, a small outpost just north of the Arctic circle.

This ancient way of traversing the frozen landscape with husky dogs is a great way of immersing yourself in the natural world.

For dark sky parks and observatories: The UK

For those in the UK, there are several opportunities to gaze at the Northern Lights. Nowhere more so than in Scotland.

The country is home to Galloway Forest Park, one of the UK’s only Dark Sky Parks thanks to the lack of light pollution.

Accessible via a sleeper train from London to Glasgow, the majestic park is a great spot to see the lights in the winter. For those that want to make a luxury stay of it,  nearby there's the 21-bedroom castle-come-hotel, Glenapp Castle where you can enjoy a view of the lights from the garden.

South of the border, there is even the chance of catching a glimpse of the lights in Northumberland, particularly at the Kielder Observatory.

The public astronomical observatory – voted small visitor attraction of the year in 2022 – is a remarkable place to visit, sitting under some of the darkest skies on the planet.

Here the “infinite inspiration” of the lights can be seen all winter long.

It can be reached by taking a 3 to 4 hour train from London King’s Cross to Newcastle and then public transport, renting a car - or hitchhiking, for more adventurous types.