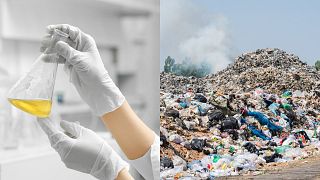 Shein is the largest online-only retailer in the world, producing between 35,000 and 100,000 new garments every single day.

But these cheap clothes can be toxic, warns Greenpeace Germany.

These chemicals threaten the health of consumers and ecosystems, the report urges.

“Greenpeace Germany’s findings show that the use of hazardous chemicals underpins SHEIN’s ultra fast fashion business model, which is the opposite of being future-proof,” warned Viola Wohlgemuth, Toxics and Circular economy Campaigner with Greenpeace Germany.

“SHEIN products containing hazardous chemicals are flooding European markets and breaking regulations – which are not being enforced by the authorities.”

What chemicals do Shein clothes contain?

Greenpeace analysed the chemical composition of 47 SHEIN products – for men, women and children.

Five of the products broke limits by 100 per cent or more.

The findings indicated “very high levels of phthalates in shoes and formaldehyde in a baby girl’s dress,” the report found.

Chemicals released into air and wastewater throughout the supply chain pose a threat to human and ecosystem health too. They also prevent clothes from being properly recycled - contributing to the vast global fashion waste problem.

The EU has strict limits on chemical concentrations in clothes - the REACH legislation. But it needs to “properly enforce” these regulations, Wohlgemuth said.

How else does the fast fashion industry impact the planet?

Ever find a fashion bargain that looks too good to be true? Chances are, it is.

Though you might pay just a couple of euros for a new top or jumper, the environmental costs are huge.

The fashion industry is responsible for more than 10 per cent of carbon emissions and consumes approximately 100 million tonnes of oil every year. Every second, a truckload of textiles ends up in landfill or is incinerated.

Creating polyester - the key material in lots of brand clothing - is a very carbon intensive process.

But despite the urgent need to decarbonise, demand for cheap items isn’t slowing. The average consumer throws away 60 per cent of new clothes in the same year they were bought.

Companies like SHEIN stand to profit from this cycle of constant consumption. Earlier this year, an analysis revealed that 70 per cent of products on sale on SHEIN’S website were less than three months old.

This ultra-cheap model not only contributes to planetary warming but harms workers down the supply chain.

“At its core, the linear business model of fast fashion is totally incompatible with a climate-friendly future – but the emergence of ultra fast fashion is further accelerating the climate and environmental catastrophe and must be stopped in its tracks through binding legislation,” Wohlgemuth said.