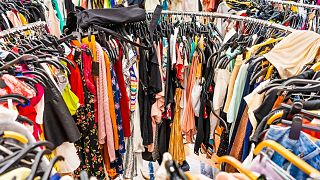 The European Union warned consumers to stop using their clothes like throwaway items and said on Wednesday that it plans to counter the polluting use of mass-market fast fashion.

New rules proposed by the EU's executive arm call for a mandatory minimum use of recycled fibres by 2030 and would ban the destruction of many unsold products.

The European Commission rules also seek to contain the release of microplastics and improve global labour conditions in the garment industry.

“The clothes we wear should last longer than three washes.”

The EU environment commissioner, Virginijus Sinkevičius, said the commission wanted fast fashion “to get out of fashion”, saying: “By 2030 textiles placed on the EU market should be long-lived and recyclable, made to a large extent of recycled fibres.”

We welcome the #circulareconomy proposals from @EU_Commission on improving the sustainability of everyday products.

We are committed to an ambitious #GreenDeal ?? to build a brighter future.? pic.twitter.com/2vLKowTu6V

The changes would require a massive shift in an industry that in order to keep costs and prices down, produces items with a short life span in developing nations in Asia and Latin America, often under poor working conditions.

“All textiles should be long lasting, recyclable, made of recycled fibres and free of dangerous substances. The strategy also aims to boost reuse and repair sectors and address textile waste,” Timmermans said.

Almost three-quarters of all clothing and textiles used in the EU are imported. In 2019, the 27-nation bloc imported over €80 billion in clothes, mainly from China, Bangladesh and Turkey, according to the European Commission, and the average consumer throws away 11kg of textiles a year.

Fast fashion is most closely associated in Europe with the high street - commercial areas where clothes-hunters shop at mass-market retailers such as H&M, Primark and Zara. The EU, although targeting clothing made for that market, also wants luxury brands to set the standard for sustainable fashion in an industry where the fleeting and ephemeral is essential to turnover.

“The designers, the artists - they realise that the world has changed and that we need to revisit the way we design fashion," he said.

Sustainability is a new frontier in the luxury industry. Upcycling and other methods to reduce the carbon footprint have been mainstays for some of the most famous brands on the runways of London and Paris, such as Stella McCartney, which belongs to the Kering group, and more recently Chloe under sustainability-conscious designer Gabriela Hearst.