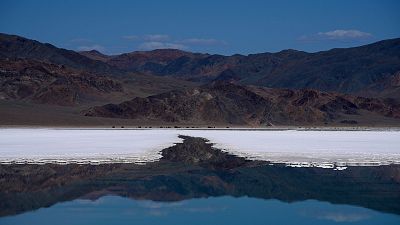 The race is on to produce more lithium in the United States.

Rare earth metals like lithium are a crucial component in electric vehicle batteries.

As production of electric cars surges around the world, demand for the mineral is soaring - and US miners are looking to cash in.

"(Lithium) is now coming to the US. It's literally coming,” said Eric Norris, President of Lithium at Albemarle Corporation, a US chemical manufacturer.

“Production today is very dependent on Asia. More of that's coming to the US. That's important."

The US currently has only one operational lithium mine. That could soon change, with multiple new projects in development across the country.

In October, the Biden administration awarded €2.7 billion in grants to build and expand domestic manufacturing of batteries for electric vehicles in 12 states - meaning demand could rise significantly.

But some environmentalists warn of the adverse consequences of lithium mining.

So what is lithium mining - what does it mean for the planet?

Why is Lithium in high demand?

Countries are increasingly phasing out fossil-fuel cars in favour of electric vehicles.

As of 2035, the EU will require all new cars and vans to be zero-emission, while the US is looking to phase out all fossil fuel-reliant heavy duty vehicles by 2040.

Lithium is the most common, but graphite and cobalt are also used.

It’s so useful because it’s extremely light, explains lithium industry analyst Chris Berry, pointing out that the metal is also prefered because it “holds a charge” and has a “30-year track record of use across a host of different applications.”

Worldwide, demand for lithium was about 317,517 metric tonnes in 2020, but industry estimates project demand will be up to six times greater by 2030.

To achieve its goal of climate neutrality by mid-century, the EU will require 18 times more lithium than it currently uses by 2030 and almost 60 times more by 2050.

"Lithium demand on a global basis is growing at about 20 per cent per year," according to Berry.

Where are all the lithium mines?

Lithium reserves are distributed widely across the globe. But lithium mines are not.

Europe and the US both only have one operational lithium mine each.

The US produces less than 2 per cent of the world's supply of lithium, although it has about 4 per cent of proven reserves.

Much of the world's lithium comes from South America and Australia, with China dominating the world supply chain of lithium-ion batteries.

"The Chinese own probably 60 to 70 per cent of the lithium supply chain in particular," says Berry.

US developers are looking at several possible new mine sites.

One project is proposed for Thacker Pass in northern Nevada by Lithium Americas.

If green lit, this mine would make millions of tons of lithium available.

Australian-based Ioneer also wants to build a large lithium mine in Nevada, which the company says is expected to produce some 20,000 tonnes of lithium per year, enough to power hundreds of thousands of electric vehicles annually.

Is Lithium mining bad for the planet?

Transport accounts for around 30 per cent of global carbon emissions and 72 per cent of these emissions come from fossil fuel vehicles.

But electric vehicles are no silver bullet.

Switching to them would knock out a large chunk of these emissions, though there are still significant issues around how electricity is generated and the environmental impact of manufacturing new cars.

Lithium mining itself has negative environmental consequences, as with many types of resource extraction.

When lithium is produced using evaporation ponds, for example, it takes approximately 2.2 million litres to produce one metric tonne of lithium. This is the equivalent of around 48,000 five minute showers.

The Sierra Club - a grassroots US environmental organisation - has spoken out against lithium mining in the past.

In a 2021 review, its board of director’s recognised the need for electrification - but called for a “careful” approach to mine approval.

“In general, large-scale mining is environmentally destructive and often disruptive to nearby communities,” the document reads.

“As such, the process of developing mining operations, including lithium, needs to be approached carefully and with attention to community concerns.”