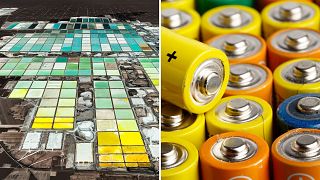 What are the alternatives for lithium-ion batteries in electric cars?   -  Copyright  Tom Hegen / Canva
By Maeve Campbell  •  Updated: 09/02/2022

In the age of electrification, we take rechargeable batteries for granted. From phones and laptops to hi-tech cameras - these batteries have one thing in common. They’re all made of lithium.

Lithium-ion batteries (Li-ion) have taken the world by storm in recent years. They are the most popular battery storage option today, controlling more than 90 per cent of the global grid market. And they store energy efficiently - for a long period of time.

But their most notable use nowadays is in electric vehicles.

Over the last decade, a surge in lithium-ion battery production has led to an 85 per cent decline in prices - making electric cars commercially viable for the first time in history.

Batteries pave the way towards a future without fossil fuel dependence, which is crucial if we want to slow down climate change.

But lithium is not the most environmentally friendly chemical element we could be using. In South America, huge lithium reserves are using up water by the gallon, causing devastating water-related conflicts among locals. A whopping 2.2 million litres of water is needed to produce one ton of lithium.

Lithium-ion batteries are the most popular storage option today, controlling more than 90% of the global grid market.

Lithium extraction also harms the soil and can cause air contamination.

Many do point out that Li-on batteries can be recycled, which is certainly a plus as it means they can be used again and again rather than mining having to occur each time.

But this is not yet a universally established practice and there has been meagre progress in battery recycling in recent years. So if we are to continue relying on lithium batteries, this must improve. As Mario Pagliaro puts it in a recent study, “the reuse and the recycling of LIBs is no longer an option but an inevitable need for both battery and battery EV manufacturers.”

In the meantime, many are searching for a replacement. Especially because there is no guarantee that we’ll be able to find enough raw material to keep up with demand.

What can we use instead of lithium in batteries?

Salt, or sodium, is a close chemical cousin to lithium. While a very similar element, it does not have the same environmental impact, meaning it could be a feasible option to replace it.

However, sodium is three times heavier than lithium, which means sodium-ion batteries are also heavier. Sodium batteries may also be less powerful because they have a lower cell voltage.

If salt batteries are a thing, then why not use seawater? A team at the Karlsruhe Institute of Technology in Germany has developed a prototype battery based on seawater.

According to lead scientist Stefano Passerini, they already have interest from investors in South Korea.

The world's oceans contain an estimated 180 billion tons of lithium. But it's diluted, so researchers are devising numerous filters to try and selectively extract the seawater from the lithium - to put it to good use.

Iron could perhaps be a strong lithium substitute. The chemical element is thought to have better ‘redox potential’, which is scientific lingo for “reduction potential” (it won’t lose its efficiency so quickly).

In September last year, an article entitled ‘Iron Battery Breakthrough Could Eat Lithium’s Lunch’ was published in Bloomberg. It focuses on a clean energy firm in Oregon, US, that is making a record purchase of batteries that depend on “iron-flow chemistry”.

These can apparently store renewable energy for longer and could “help overcome some of the reliability problems that have caused blackouts in California and record-high energy prices in Europe”.

The only limitation with iron-flow batteries is that they are much larger than lithium batteries. This means they wouldn’t be able to be used in smartphones or laptops or even electric vehicles, but could work well as a practical option for grid storage.

Many scientists tout silicon as a crucial ingredient that could transform batteries. It wouldn’t replace lithium, but it would be added to lithium batteries - meaning they would be cheaper and more effective in the long-term.

Currently, lithium-ion batteries use graphite as a key component within them. Graphite consists of multiple layers of carbon stacked on top of one another. And in a traditional lithium-ion battery, lithium ions can slip through these vacant spaces between the layers, resulting in a loss.

Replacing graphite with silicon could lead to lighter and safer batteries.

“Silicon as the anode in a lithium-ion battery represents the 'holy grail' for researchers in this field,” according to specialist Professor Apparao M. Rao, who is director of the Clemson Nanomaterials Institute in South Carolina, US.

Magnesium is currently being researched as a potentially powerful component in future batteries. It is an element that can carry a significant charge of +2, which is more than both lithium and sodium.

Batteries made from magnesium metal could have higher energy density, greater stability, and lower cost than today’s lithium ion cells, say scientists in one study.

Magnesium has another advantage too. Each magnesium atom releases two electrons during the battery discharge phase, compared to one electron for lithium. This gives it the potential to deliver nearly twice as much electrical energy.

One proponent is Texas-based startup Bemp Research Corp, a company which has developed a battery alternative. Bemp is trying to gain investment to develop and commercialise its B4C-hemp - short for ‘Boron Carbide made from hemp’, in the form of lithium sulphur battery technology.