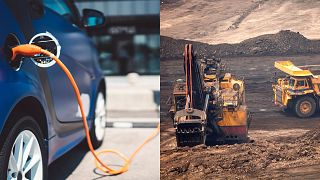 A lithium mine with the capacity to supply 700,000 electric car batteries per year is set to open in France.

The massive mining project - unveiled today by French minerals company Imerys- will operate on the site of the existing Beauvoir kaolin quarry in Central France.

The site contains one million tonnes of lithium, drilling surveys have revealed - enough for the extraction of 34,000 tonnes per year for 25 years.

This metal is a crucial component in the production of electric vehicles, but mining it can also have adverse environmental consequences.

The EU bloc currently imports the vast majority of what it uses.

What is lithium and why does Europe need it?

As countries and individuals try to reduce their carbon footprint, electric vehicle sales have surged.

The EU is plans to ban the sale of combustion engine vehicles from 2035.n.

Lithium is the most common of these metals, but graphite and cobalt are also used.

To achieve climate neutrality by mid-century, the EU will require 18 times more lithium than it currently uses by 2030 and almost 60 times more by 2050.

But Europe only has one operational lithium mine, in Portugal, meaning it relies heavily on imports.

The EU imports 78 per cent of its lithium from Chile, while the US and Russia provide 8 per cent and 4 per cent respectively.

The new mine will be operational by 2028, Imerys has indicated.

Petrol cars are very bad for the planet. Transport generates about a quarter of the EU's total emissions, and road transport accounts for roughly 70 per cent of these emissions.

But any type of resource extraction is harmful to the planet, and lithium is no exception.

This is because removing raw materials can result in soil degradation, water shortages, biodiversity loss, damage to ecosystem functions and an increase in global warming.

The EU is also debating whether to classify lithium as a hazardous material, which could raise project costs.

When lithium is produced using evaporation ponds, it takes approximately 2.2 million litres to produce one metric tonne of lithium.

Imerys claimed it would reduce its environmental impact by using an existing mine site - Beauvoir site is a kaolin quarry - and by using underground mining methods.