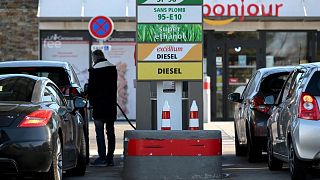 Russia’s invasion of Ukraine has pushed fuel prices to record highs across Europe. And now, a number of European countries are looking to cut fuel taxes and provide relief for drivers suffering from the soaring costs of running a car.

In France, there are plans to provide a rebate of €0.15 per litre of fuel to help soften the blow of price hikes. It is estimated that motorists could save €9 on a 60 litre tank of fuel.

The “fuel discount” will begin on 1 April and last for four months, Prime Minister Jean Castex said in an interview with newspaper, Le Parisien. It is set to cost the French government just over €2 billion and will cover households as well as businesses encountering rocketing prices at the pump.

Germany’s Finance Minister has also proposed a “crisis discount” to reduce the impact of the war in Ukraine on fuel costs. It could see prices cut by 0.2 per litre, according to German media but the measure has not yet been agreed by the country’s three-party governing coalition.

Fuel taxes in Sweden are being temporarily cut as well at a cost of €350 million and car owners are being compensated for the rise in fuel prices. Belgium and the Netherlands are also cutting taxes on fuel to cope with the crisis.

Now the EU looks set to follow suit, agreeing on Tuesday to subsidise household fuel prices and offer support to communities that have been hit by a surge in energy costs. Ministers say that the war in Ukraine is leading to a sharp increase in the price of commodities, particularly food and gas, calling for a coordinated response from European states.

One of the three arms of the EU’s strategy is to support those struggling with the rise in fuel prices.

“This one we did in France and many other European countries have done the same, or are considering doing this,” French Finance Minister, Bruno Le Maire told a news conference after chairing talks between EU ministers.

“That would be a kind of discount on prices at the pump. Many, many people have no choice but to drive to work by car. The support for households we deem necessary.”

Are there alternatives to cutting tax on fuel?

Not everyone believes that a cut to fuel taxes is the only way to go, however.

Members of the Green Party in Germany have instead proposed a speed limit on Germany’s motorways to curb fuel use. A speed limit would be “good for protecting the climate, protecting resources and safety on the road,” according to Christopher Stolzenberg, a spokesperson from the environment ministry.

Other options are being proposed in Sweden too with another €384 million reportedly being added to the country’s budget to incentivise drivers to switch to electric vehicles.

Italy has also just introduced plans to subsidise the purchase of new electric vehicles. Up to €6,000 will be available when buying a fully electric vehicle and €2,500 for those buying plug-in hybrids.

Though the move is intended to support the country’s automotive industry and is not part of its package to relieve the impact of the Ukraine war, it comes at a timely moment for those looking for ways to escape the hike in fuel prices.