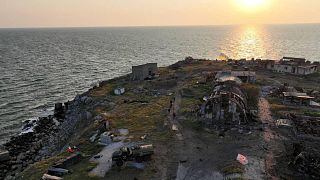 Environmental damage in Ukraine caused by Russia's invasion was estimated at around €36 billion, with millions of hectares of natural reserves under threat, Ukraine's environment minister said on Monday.

One-fifth of protected areas in Ukraine are at risk of destruction and about 2,000 cases of environmental damages have already been recorded, environment minister Ruslan Strilets said when showing slides to European Union lawmakers at a hearing in the EU Parliament in Strasbourg, France.

According to estimates from the Ukrainian government, the bill for air pollution caused by the war in Ukraine is so far about €25 billion. Another €11.4 billion is needed to address damage to the soil.

He said another 79 million tons of greenhouse emissions could be produced for the reconstruction of infrastructure and buildings destroyed during the war.

Ukraine has been tracking the scale of the environmental damage

Since the start of the war, Ukraine has been tracking the environmental damage done by the invasion. In the first four months, satellites detected more than 37,000 fires - a majority affecting forests and other natural ecosystems.

Many of these fires were started by shelling and a third were detected in protected areas, according to the Ukraine Nature Conservation Group (UNCG), a non-profit made up of the country's activists and scientists.

But it's more than just burning forests set alight by weaponry. Large volumes of military scrap containing chemicals that can pollute groundwater have been left behind.

Scientists are concerned about the steppe grasslands in southern and eastern Ukraine. Even before the invasion, conversion to farmland had left just 3 per cent of this rare ecosystem intact. Now plant scientists at the UNGC believe that 20 species native to the steppe may have disappeared completely due to the war.