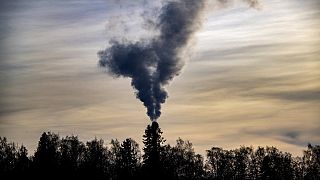 Fossil fuel emissions will hit a record high in 2022 and show no sign of decreasing, according to an analysis by the Global Carbon Project.

The study found that CO2 emissions produced by burning fossil fuels will reach 40.6 billion tonnes in 2022, representing a 1 per cent rise on last year.

“If current emissions levels persist, there is now a 50 per cent chance that global warming of 1.5°C will be exceeded in nine years,” according to the authors of the report.

Scientists say limiting global warming to 1.5°C is necessary to prevent the most severe consequences of climate change, which could kill millions and make large parts of the planet uninhabitable.

Global emissions dropped in 2019 due to COVID, but the study – which brought together more than 100 scientists from 80 institutions – says they will climb “slightly above” pre-pandemic levels this year.

Why are greenhouse gas emissions rising?

The report highlights several reasons why greenhouse gas emissions are on the increase.

"The conjunction of two factors, the continuation of the post-COVID recovery and the energy crisis [sparked by the Ukraine war],'' Glen Peters, one of the report’s authors, told AFP.

The study also found that land-use changes, especially deforestation, are a significant source of CO2, constituting around 10 per cent of all emissions.

Indonesia, Brazil and the Democratic Republic of the Congo account for 58 per cent of global land-use change emissions.

"We are at a turning point and must not allow world events to distract us from the urgent and sustained need to cut our emissions to stabilise the global climate and reduce cascading risks,” says Professor Corinne Le Quéré, another scientist who worked on the report.

"If governments respond by turbo-charging clean energy investments and planting, not cutting, trees, global emissions could rapidly start to fall,” he added.

Where are oil and gas emissions increasing?

The picture among major emitters for 2022 is mixed, according to the report.

The findings come as world leaders meet at COP27 in Egypt to discuss the climate crisis.

"This year we see yet another rise in global fossil CO2 emissions when we need a rapid decline," said Professor Pierre Friedlingstein who led the study.

"There are some positive signs, but leaders meeting at COP27 will have to take meaningful action if we are to have any chance of limiting global warming close to 1.5°C.”

He added that we are not seeing the action required to do this.

Oil is the largest contributor to total emissions growth up 2.2 per cent this year, hitting new highs in 2022.

Emissions from coal – which had been declining since 2014 – are set to increase by 1 per cent and surpass the record level during that year.

Russia’s invasion of Ukraine has helped fuel a resurgence in fossil fuel burning around the world by increasing gas prices and restricting some supplies.

How much time do we have left to cut back on emissions?

Insights into the carbon budget - how much carbon humanity has left to emit if it is to prevent 1.5°C of warming before 2050 - were also offered by the report’s authors.

At the current rate of burning, there is only a one in two chance that this objective will be achieved in nine years.

Greenhouse gas emissions would have to fall by 45 per cent by 2030 to have a chance of achieving this.

At COP21, 196 states signed up to the 2015 Paris Agreement to keep global temperature rises below 2°C above pre-industrial levels, preferably limiting it to 1.5°C.

The EU also has its own pledge to reach climate neutrality by 2050.

Global warming of 1.2°C has already been recorded, causing natural disasters to grow in frequency and intensity across the world.

Why did more people die over the summer in EU than expected?