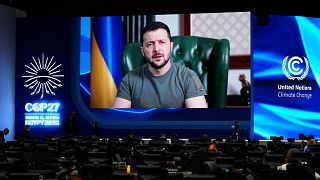 The Ukrainian President slammed the environmental repercussions of Russia’s war during a video address at COP27 on Tuesday.

Zelenskyy pointed to the damage caused by attacks on Ukraine’s environment, claiming it has led to the destruction of millions of hectares of forest.

He also blamed the war for causing fossil fuel prices to skyrocket worldwide. The Ukrainian leader claimed it had “forced” dozens of countries to resume burning coal.

How much environmental damage has the war in Ukraine caused?

Some 30 per cent of Ukraine’s protected natural areas have been bombed, polluted, burned or caught up in military action, the Ukrainian Ministry of Environmental Protection and Natural Resources reported in August.

This figure is now likely higher.

Fires have ravaged an area the size of Texas, with blazes tearing through 250,000 acres of forest ecosystems. That is equivalent to the same number of football fields.

Speaking in a pre-recorded message shown to world leaders in Egypt, Zelenskyy said "there can be no effective climate policy without peace on Earth, because nations think only of protecting themselves here and now.”

He referred to the global food and energy crisis triggered by the Russian invasion which have plunged many economies into recession and pushed populations in the developing world to the brink of famine.

In response to soaring energy prices and reductions in Russian gas supplies, many European countries, such as Germany and Austria, have turned to dirty fossil fuels, like coal, to generate power.

"There are still some for whom climate change is just rhetoric, marketing, but not real action,”

“These are the ones who prevent the implementation of climate goals,” he added.

The Ukrainian President urged world leaders to clamp down on aggressive states for the sake of the climate, referring to Russia’s invasion of his country.

"We must stop those who, through their illegal war, are destroying the world's ability to work together for a common goal," he said.

Zelenkyy called for the creation of a "global platform to assess the impact of military actions on the climate and the environment".

This subject will be discussed on Wednesday during an event organised by Ukraine at COP27.